A swarm of 300 drones landed in Cornwall, calling on G7 leaders to act now to protect the planet. The unusual action was implemented by Greenpeace.

The new Greenpeace film, which uses 300 illuminated drones, calls on the leaders gathered at the G7 summit to "act now" to combat the climate and nature crisis.
In the film, the UK's largest drone swarm creates moving 3D images of iconic animals. The animals come to Cornwall from all corners of the world to call on leaders at the G7 Summit to step up to fight the climate and nature crisis.

The drones' movements were choreographed using artificial intelligence software to form 3D animals and words. It was developed for Greenpeace in collaboration between drone art company Celestial, projection artists from Projections On Walls and animators from We Are Covert. Celestial implemented the Scottish Hogmanay 2021 New Year's Eve drone show, for example.

A total of 300 illuminated drones were used to create the displays - twice as many as were used for the Hogmanay performances. This made it one of the largest drone shows ever produced in the UK. The drone formations were up to 76 meters high and 122 meters long.

The two-minute film begins with a projected image of a turtle swimming across the dark cliff face of Mullion Cove in Cornwall as a child narrates, "Once upon a time, world leaders gathered in Cornwall to decide our future." Projections of other animals are then shown, including a jaguar, a tuna and a bee. The animals gradually transform into "animal spirits" created by hundreds of illuminated drones that move across the sky.

The film reaches its climax when the drone animals gather en masse over a cliff in Cornwall, where the G7 summit is taking place. In the final sequence of the drone display, the drone animals transform into the words "Act now." The film ends with footage of a protest staged by Greenpeace activists at RAF Mildenhall as US President Joe Biden arrived in the UK. As the president was preparing to land on Air Force One, the activists unfurled a banner that also bore the message "Act now."

Prolight + Sound is also increasingly dedicated to the topic of environmental and climate protection. Acting sustainably - and creating impressive presentations at the same time: Prolight + Sound wants to prove that these goals are not mutually exclusive with the "Green Event Space Contest". The search is on for a detailed concept for the multifunctional and sustainable showcase of the future that combines exhibition space and event stage while helping to conserve natural resources. 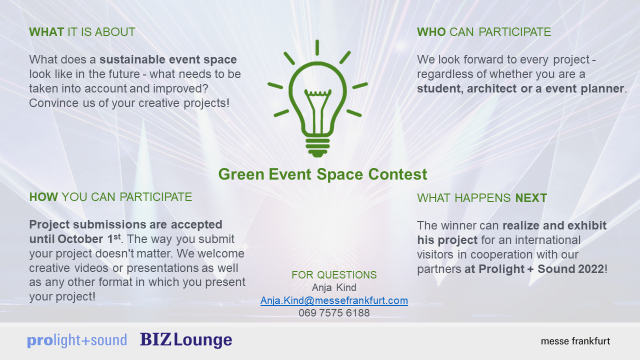 The Green Event Space Contest was first presented in the video format "Prolight + Sound BIZLounge" on June 14, 2021 and is still open for concept. True to the motto of the Greenpeace film: Act now!

Prolight + Sound 2022: Despite all the remaining c

This is kind of superlative! #Repost @hofalutec ..

New interview with SGM (Light) on our Prolight + Sound Blog: "A single spotlight with two powerful strobes, a floodlight with high color rendering and

#Restart. For 18 months, the industry met exclusively digitally and missed personal encounters and the exchange of ideas face-to-face. Formnext is currently taking place (16.