DPA microphones will soon land on Mars! On July 30, 2020, the Mars 2020 Rover of NASA was sent on its way to Mars - fully equipped with technical equipment of DPA microphones.

Microphones are supposed to give insight into the soundscape

The first sounds of the Martian atmosphere could already be heard on December 1, 2018. A highly sensitive seismometer on board NASA's InSight Mars Lander recorded vibrations caused by the Martian wind. In addition, the vehicle's air pressure sensor also recorded the wind noise. However, the sounds were recorded with instruments made for other purposes, so the recordings can only give an idea of what the soundscape really sounds like.

Which DPA equipment is used ?

NASA has extensively tested a variety of microphones and selected DPA equipment. The 4006 omnidirectional microphones will be the "ears" of the rover; they are mounted on the vehicle and paired with modular active MMP-G cables that act as ultra-transparent preamps. An MMA-A digital audio interface will be located inside the vehicle body, which serves as the auditory part of the "brain". The MMA-A will digitize the sound to the highest quality and transmit it to a computer in the rover via a USB connection.

The journey to Mars will certainly not be a walk in the park, as the rover is exposed to extreme temperatures (down to -100°C), fluctuating travel pressure and intense vibrations. A special housing is to ensure that the equipment arrives unharmed. In addition, work is underway on a special MMP-G amplifier housing that can be screwed to the outside of the rover.

Entering the atmosphere, descent and landing are the most risky parts of the whole mission. No one has ever seen or heard a parachute open in the Martian atmosphere or the rover being lowered on a line from its descent stage to the Martian surface. The task of the DPA microphones is to capture these sounds for NASA. The special microphone is to be used when entering the atmosphere and finally on the surface of the planet.

Impressions
Until January, an extravagant exhibition will be held in Bordeaux, France, in a unique location. In a former submarine base, Culturespaces has opened the largest digital art centre in the world: the Bassins de Lumières. Four monumental immersive digital exhibitions dedicated to the most important artists of art history and contemporary art are currently presented…
more
Impressions, Prolight + Sound
For some years now, the topic of "sustainability" has also been gaining importance in the event industry. This includes not only the use of LEDs and energy-saving technologies, but also solutions for the environmentally friendly implementation of events. The team from TRASH GALORE has such an idea, who want to create an online second-hand goods…
more
Impressions, Prolight + Sound
Summer, sun, festivals ... unfortunately there is no such thing this year. All big festivals had to be cancelled due to the Corona crisis - a bitter loss for bands, fans and organizers. Megaforce sets a statement and wants to "Save the summer". The specialist for stage construction, event construction and special constructions, initiates the…
more
Impressions, slider-english
The Corona crisis has put the German events industry under massive economic pressure. More than 700 companies want to draw attention to the consequences for the industry, including the Dresden company MADRIX. Action "Night of Light": Statement to the politicians to save the event industry. The official regulations in the wake of the Corona crisis…
more
Impressions, Prolight + Sound
In the current corona crisis, protective clothing of all kinds is needed. Also Hörluchs Hearing GmbH & Co. KG, as an innovative manufacturer of high-tech products, also feels a responsibility to counteract the lack of makeshift protective masks. Therefore Hörluchs has partially changed its production to makeshift masks. Modern 3D printing process for mask production…
more
Impressions
Prolight + Sound is increasingly positioning itself as an international trade fair for technologies and services for events and entertainment. In 2020, the focus will be on innovations in various subject areas. This offers the opportunity for companies to use demo rooms. This gives exhibitors the opportunity to actively and individually help shape the supporting…
more
Exhibitor, Impressions, Prolight + Sound
To mark the 25th anniversary of Prolight + Sound, exhibitors can actively participate in the supporting programme and present their innovations in lectures or product demonstrations. Messe Frankfurt will provide individual rooms for demonstrations and outdoor stages for presentations under real conditions. Diverse and comprehensive conference programme - join in now! The Immersive Technology Forum…
more
Exhibitor, Impressions, Prolight + Sound
The fossil Sue the T-Rex, about four metres high, 13 metres long and 68 million years old, named after its discoverer Sue Hendrickson, has a new appearance thanks to a new lighting concept. Lightswitch Chicago has installed a lighting and AV system based on ETC technologies. ETC is one of the world's leading manufacturers of…
more
Impressions, Prolight + Sound

For all who did not have the possibility to visit Prolight + Sound 2019...

15 years BigCityBeats, this anniversary will be celebrated tonight at 10 p.m. with loud beats in the Festhalle Frankfurt. How convenient that the DJs of the DJ Convention will be DJing at Prolight + Sound 2019 already from 3 p.m. to get the trade visitors and guests in the right mood. Experience the WarmUp in Hall 4.0 Saal Europa and listen to the remixes and fat sounds of the record artists. 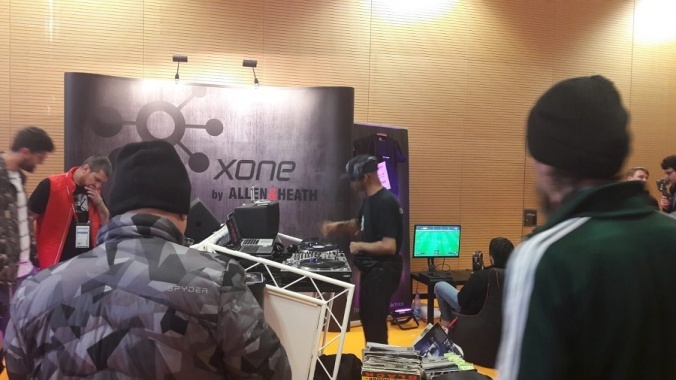 These even make a sound. The Italian developer of camera and video accessories for the professional photo, film, theatre and video markets, Manfrotto, has presented his tripods in a creative way. The bike even makes a sound. You can see the hot bike in hall 12.0 booth E52.

...would be the drummer who plays his solo on this drum set.

Cool sound in lofty heights. Even more gadgets, innovative stage constructions and everything around light and special effects can be seen in halls 12.1 and 12.0.