The fossil Sue the T-Rex, about four metres high, 13 metres long and 68 million years old, named after its discoverer Sue Hendrickson, has a new appearance thanks to a new lighting concept. Lightswitch Chicago has installed a lighting and AV system based on ETC technologies. ETC is one of the world's leading manufacturers of lighting and overhead machinery.

1990 Sue the T-Rex was discovered by Sue Hendrickson in South Dakota during excavations. The dinosaur has been a magnet for visitors to the Chicago Field Museum ever since. To perfectly showcase the massive dimensions of "Sue," Lightswitch Chicago installed a customized lighting and AV system with ETC spotlights and controls in focus. The project required the complex integration of control protocols and various fixed fixtures, including Source Four LED Series 2 and ColorSource from ETC, as well as Xicato systems that can be wirelessly controlled with DMX via Bluetooth. This cooperation is a premiere - and an important step into the future of the lighting industry.

The heart of the AV system is an ETC Mosaic controller, which in this case performs an unusual task: It functions as a control panel and not, as usual, as a control centre. It does not make a decision, but receives commands from Watchout and AMX. Mosaic then gives feedback to AMX and simultaneously serves as an integrator for the wireless lighting of Xicato and Paradigm.

A Mosaic MSC1 controller processes all incoming commands, controls DMX floodlights in relation to Sue's scenic lighting, and retrieves presets from Xicato Wireless Bluetooth lights. Mosaic has access to the Xicato Control network to retrieve scenic images and to dim the hall up and down for presentations. Mosaic could also be programmed to automatically play out a safe level limit when a colour selection command was given, so that light limits for conserved materials are not exceeded. 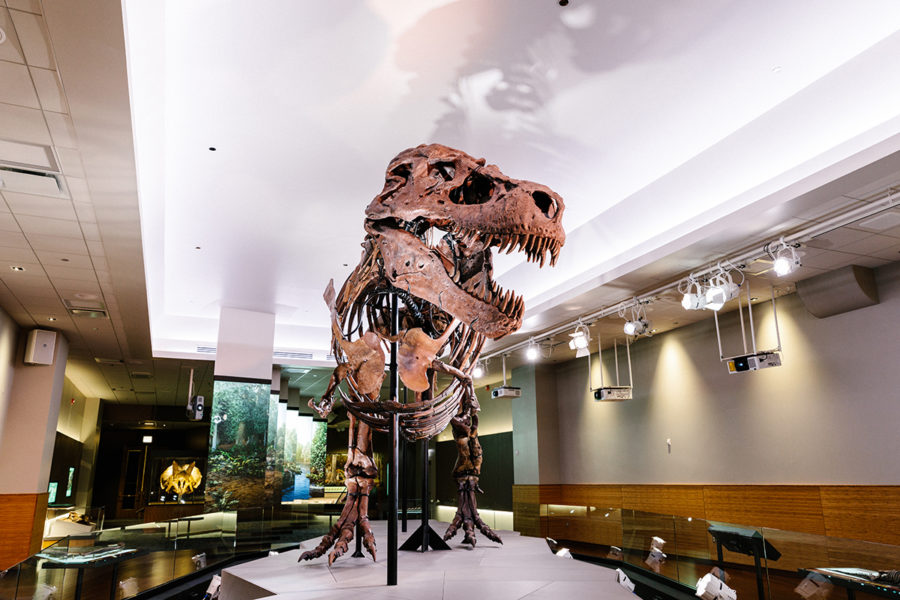 ETC Paradigm supplies the hall with white light based on standard relays and dimmers. It serves as a control station for any temporary overloads. The Xicato Control solution has a Bluetooth Low Energy (BLE) wireless protocol. Names, groups and scenes could be programmed in individually addressable modules.

Sue the T-Rex is the big attraction in the Chicago Field Museum. The rush of visitors has been considerable since the move. Thatcher Waller, Senior Lighting Designer at Lightswitch Chicago, attributes the success of the exhibition to the technology used.