With a total surface area of 2,500m², multiple halls and a 120m² stage, Stadthalle Fürth arena has made a name for itself as a venue for music and cultural events as well as congresses and seminars. But the arena has been starting to show its age, and as part of a modernisation package, Feiner Lichttechnik stepped in to plan, install and program a new lighting system.

Previously, the lighting in the main hall had been controlled via a Strand Lighting Outlook system, but it was getting on in years and was no longer completely reliable. Together, Feiner Lichttechnik and the arena management decided on an Ecue control system which can be run from a central computer and touchscreen as well as additional interfaces. Regensburg-based Feiner Lichttechnik were given a helping hand with the installation by Fürth partner firm Elektro Winter. 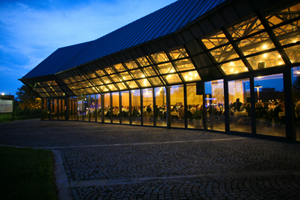 The whole building is linked up to the lighting system, with wall-mounted control panels available to admin staff as well as being found in the foyer, reception, and in the halls themselves. There’s a 19” touch screen in the control room – and its user interface can be accessed with a linked tablet from anywhere in the building. A smaller tablet with a limited user interface is also available for guests to operate the lighting themselves, during a conference for example.

In total, the new hall lighting in Stadthalle Fürth consists of 150 dimmer and relay circuits which can be controlled individually via DMX and KNX. Thanks to Feiner Lichttechnik, the arena is now ahead of the game when it comes to lighting and ready to tackle the next big event.