La Fête Nationale on 14 July is a red letter day in the French calendar, with massive nationwide celebrations capped with fireworks at the Eiffel Tower to mark the national holiday. This year, a crowd of more than 400,000 enjoyed a performance of Carmina Burana on the Champ de Mars, joined by TV and radio audiences across the country to enjoy the 250 musicians from the Orchestre National de France and the Radio France choir, and immaculate concert sound thanks to Lawo mc²36 production consoles. 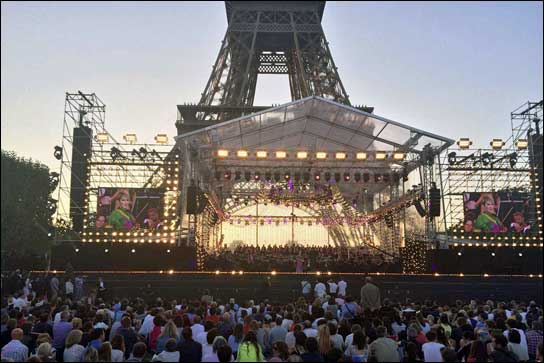 One was used for the orchestra and one for the choir to produce the concert’s audio mix.
Two DALLIS interface systems functioned as stage boxes linked via RAVENNA/AES67 audio-over-IP cards to the new Nova router, with a Yamaha mixer also connected via MADI, so that both mixing consoles could use the signals and busses.

“The 24 fader mc²36 was used for the choir and the 40 fader console for the orchestra. Both consoles as well as all the DALLIS I/O units and recording devices were wired up to our new plug-and-play Nova, as was the Yamaha mixer for the presenter’s mike and the music feed during the fireworks,” said Lawo live specialist Hervé de Caro. “With the mc²36, you can use the touchscreen to set up the user rights for the network, making it very easy to manage the preamps and and the signal split for I/O and recording.”

The RAVENNA based mc²36 all-in-one mixing console is extremely flexible and can cope with anything broadcasting, live performances and fixed installations can throw at it. Up to 32 buses can be used between the consoles, for example. The consoles and stage boxes are then connected via RAVENNA/AES67 or MADI, and the network is online, including instant access to all signals.

“Together with the mc² Compact I/O and the mc²36, the new Nova router, which I should mention is going to be officially presented at the upcoming IBC, is an extremely smart solution for both live and fixed installations,” said de Caro.

“The show went swimmingly,” commented Hervé de Caro. “The sound engineers were extremely impressed, by the sound and by the options that the mc²36 offers by way of channel processing. And they were pleasantly surprised by the quick routing and mixing via aux-sends as well.”