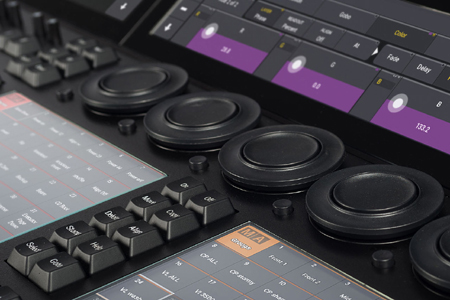 Many had already expected the new light control console grandMA3 at Prolight + Sound 2017 – now MA Lighting has launched it and promises an elegant new system architecture with newly integrated fixtures, features and effects under the hood. Conceived by industry visionaries, the system is set up for intuitive use and aims to offer the best possible user experience – now and in the future.

The console’s new features includes a large multi-touchscreen surface. All encoder and playback information will be shown on three additional, small touch displays (letterbox screens) under the larger main screen. That way the larger screens can be individually configured for each user. The highlight: all console versions are have motorized faders installed that can be coupled colorfully with LED backlights.

Compatibility with the grandMA2 series

The grandMA3 control software uses a flexible new fixtures concept that was developed to replicate the real, physical components of the most complex device. In addition, all the functions are generic and make an intuitive control possible.
The compatibility with the grandMA2-Serie makes it possible to import previously created show files on the new console. In addition, the console has a fully equipped Mode2 mode, where the native grandMA2 software runs, from version 3.4.

Additional features of the control console include:

The company will publish addional informationen at the launch at Prolight + Sound. The grandMA3 can also be inspected, up close and in person.