Opus Award Winner: “This prize is a great honor for us”

The Opus Award 2018 went to Friedrichstadt Palast in Berlin with THE ONE Grand Show. In the following interview, Technical Director Franz-Josef Münzebrock talks about various challenges posed by the show.

THE ONE Grand Show in Friedrichstadt Palast Berlin received this year’s Opus Award for the category “Technical Realization – Permanent Installation.” What does this prize mean to you?

This prize is a great honor for us and we really didn’t expect it. The OPUS is considered one of the most prestigious awards in the event technology industry.

What is so special about technical realization?

One of the technical highlights for THE ONE Grand Show is the stage floor construction, a kind of movable floe plateau that can ‘drift apart and facilitate typical dream illusions like floating or having the ground disappear underneath yourself. The fact that we only had a very limited amount of time for building and adjusting made it all the more exciting. 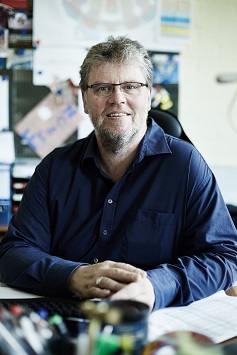 Franz-Josef Münzebrock is Technical Director of the Friedrichstadt-Palast.

Jean Paul Gaultier designed a total of 500 costumes for the show. Were there any difficulties with that?

To be completely honest: none! Working with Jean Paul Gaultier has long been a dream for the Palast. As our director Berndt Schmidt stated at the world premiere in October 2016: “whoever takes a look in Gaultier’s calendar knows that it’s sensational that the legendary couturier was able to take weeks to design 500 designs for THE ONE Grand Show.” Luckily, equipping a revue was a life-long dream of Gaultier.

The show is considered the most elaborate show in all of Europe. What challenges arose during the technical realization?
THE ONE Grand Show was Berlin’s most successful original production and the most successful production in the history of the Palast to date. Over 700,000 tickets have been sold since its debut. Combining technology, circus arts, and art in such a way that everyone is happy is one of the greatest challenges for any production.

How did you get the idea for staging?
For the first time in his life, Jean Paul Gaultier was the one who initiated a project. He had seen, THE WYLD, our last show, at the premiere in fall 2014 and was so impressed that he immediately expressed the desire to create something for the Palast. Two years later, the time had come. In theater the costumes have to contribute of the story, but you can let your imagination go wild. Implementing the artistic idea is discussed together with the technical team. The course is set in workshops and ultimately brought together in a final result.