The last basses at the Frankfurt Exhibition Grounds had barely been silenced and the Open Air Summer ended, as in autumn the big show, including the crew, had to move on. So, in mid October, six months after the successful completion of Prolight + Sound in Frankfurt, many international manufacturers of event technology were Orient bound. In China, the leading international trade fair for Live-Entertainment, has developed into an export hit. At the tenth Prolight + Sound Shanghai, there was more than just an anniversary to be celebrated. With over 20,000 visitors and a 40% increase in exhibition area, Asia’s leading event technology trade fair had a record attendance in it’s to date biggest areal. 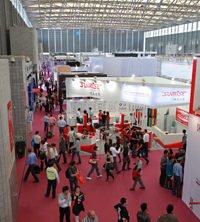 China not only belongs to the ten biggest exhibiting countries at Prolight + Sound in Frankfurt, but is also the fastest growing market for high-end technology. Even if the trade show in Frankfurt is considered to be the number one marketing platform and industry event for international manufacturers, China and Russia are promising emerging markets. They have participated in Prolight + Sound for the past ten years, and for the first time this year, were served well by Prolight + Sound NAMM Russia. In China the international success story continues even farther. The exhibition in Frankfurt is expanding its concept next year to Guangzhou in South China. The premiere of the “ProSound + Light Guangzhou” will take place from March 9-12, 2013.

As the saying goes, after the exhibition is truly before the exhibition. Although the lights at Prolight + Sound Shanghai have been turned off, the planning and prep work for the next international leading trade fair in Frankfurt, including this blog, are underway. What can the exhibitors and visitors expect in 2013? Well, we will reveal those answers in the next article.