Prolight + Sound And Musikmesse Wish You a Merry Christmas

Christmas madness? The Prolight + Sound and Musikmesse teams are already in the middle of preparing for the upcoming fairs, even in the middle of the hustle and bustle in the Christmas season. Exhibitor questions, stand bookings, press enquiries – all of these have to be coordinated before Christmas. However, there is still a little time reflection. 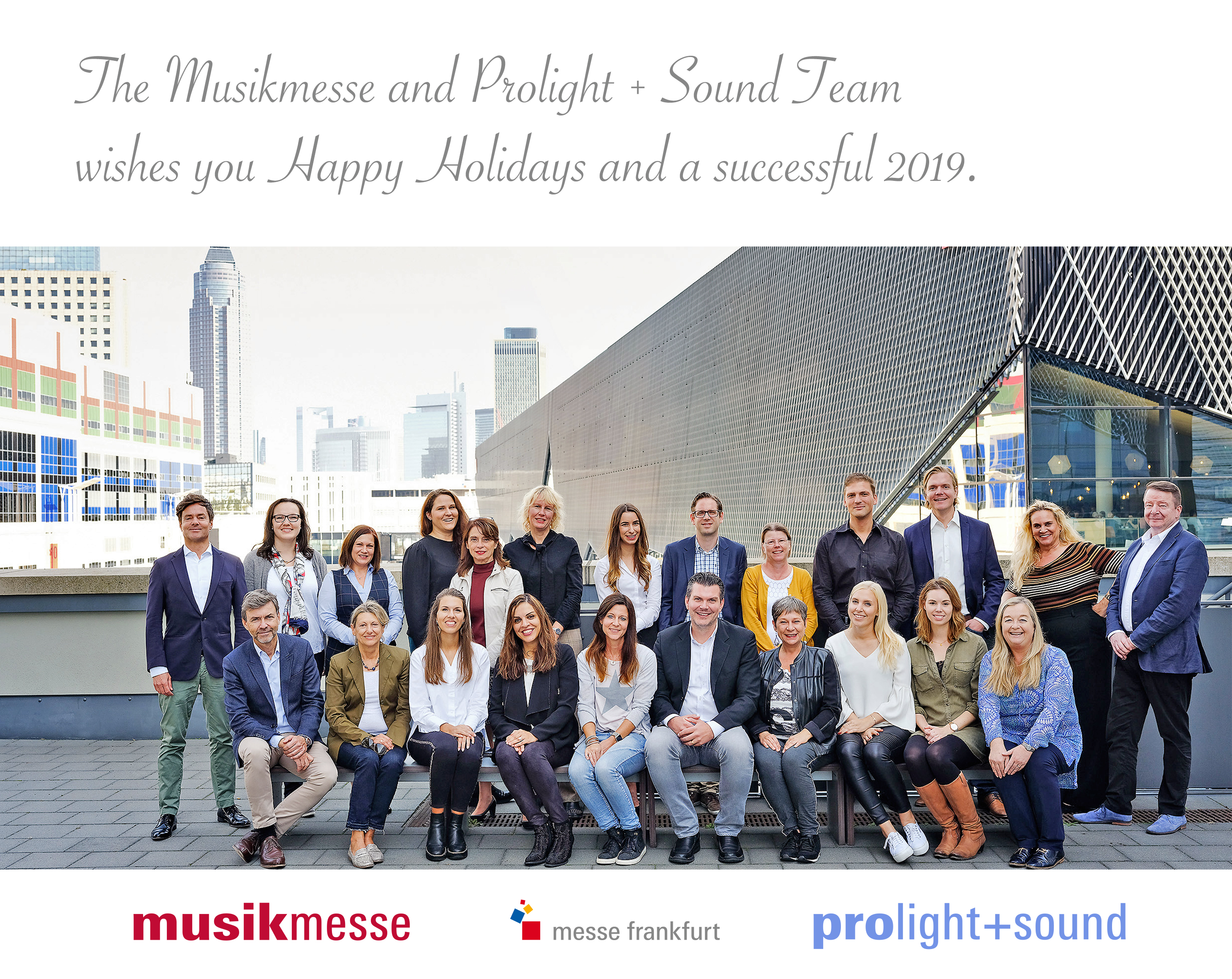 The period leading up to Christmas is also the time for looking back and taking stock. Once again: here are the highlights of Prolight + Sound 2018, to shorten the wait until April.

At Prolight + Sound it is often said: bigger, better, louder. Once again, this year exhibitors used the trade fair to present their international firsts. There was even a world record set on the open-air grounds. HD Ledshine presented the largest mobile screen in the world, and thus a real draw. The screen is 144 square meters, 16 meters wide and 9 meters tall. Thanks to more than 6,200,000 pixels, the screen has a resolution of almost 4K. In an interview, Tony Winter, founder and owner of HD Ledshine, revealed his vision for the future and how the world record came about.

Another must at Prolight + Sound 2018 was the presentation of the long-awaited grandMA3 von MA Lighting. “It’s is really amazing how much interest there was at the grandMA3,” said Björn Gaentzsch, Team Leader for Marketing at MA Lighting, who was slightingly overwhelmed as the regular presentations of the new console attracted countless interested visitors and potential customers. The MA Lighting Team was constantly engaged in discussions at the Lightpower Village.

ClayPaky hat two international premieres in store. The Italian company ClayPaky not only instigated long lines at their stand with an impressive show, they also presented their ZAC-EYE, an automatic tracking system for lighting, as well as the new Axcor 300 series, which includes three LED spotlights. The company had overwhelming success with “Triology” – a three-stage show that only allowed a limited number of visitors at once. “It was a risk,” confessed Pio Elia Nahum, CEO of ClayPaky. “But sometimes you have to take risks. I wanted to combine a technical show with art. And that was very successful and received very positively.”

One of the big topics at this year’s Prolight + Sound was real-time tracking. Performances and live demonstrations by different capturing systems could be seen at different booths. BlackTrax, which belongs to the Cast Group, presented together with L-Acustics, Notch, Disguise, AR+ and Panasonic, a show that impressively demonstrates the possibilities of the system. Alexander Alvarez, Director of Noitom Ltd., showed how easy it is to turn into an animated racoon.

Motion capturing will certainly accompany the industry for the next few years. Trade visitors can already look forward to next year’s Prolight + Sound and what all is possible with these systems.

And what else? The usual? Of course, you couldn’t miss the classics at Prolight + Sound 2018: the impressive PRG show in the Festhalle – a pleasure for all the senses, as every year – the Award Show presenting the PIPA, MIPA, Opus and Sinus Awards, the cheerful presentation of the Mondo*dr Awards 2018 and the countless conferences and seminars.

In 2018 the “Immersive Technology Forum” was met with great interest. The focus was on technologies that blur the boundaries between reality and virtual perception: 3D audio, virtual reality, 360° film and holography. For the exhibitors it was a good opportunity to give the nascent technology a platform. “Immersive technologies are an exciting area. Here we were able to show how we realize 3D projections on stage,” says Andreas Gause from Gerrits GmbH. That goes in the direction of augmented reality. “Because we realize the 3D content while real people are on stage.”

There was also plenty of “socializing” at the fair. The first annual Messe Live Talk with presenter Norbert Stangl from Laserworld was streamed parallel on Facebook and YouTube, so that the viewers could interactively participate with comments and messages. Technicall, the implementation was also very interesting as a central stream was set up for both channels on a streaming server. According to Norbert Stangl, “we deliberately chose both channels in order to increase our reach. The YouTube stream was of higher quality on the visual end, while the Facebook stream offered a higher interaction rate.”

The other exhibitors also actively used social media. At the Omnitronic stand in Hall 5.0 DJ Release‘ performance was broadcast live on Omnitronic’s Facebook page via webcam. This meant fans who weren’t there in person could still take part in the show from their own living rooms.

With all the highlights and innovations, a glance forward. After all, Prolight + Sound 2019 will also feature a major innovation: Hall 12. Brand new and very modern, it will be the new venue for light, stage and multimedia. The new hall layout reflects diversity and modernity and offers a place full of creative impulses at Prolight + Sound and a diverse presentation space for exhibitors.