Prolight + Sound is a meeting place for new and old faces every year. Many companies are among the regular exhibitors and are present every year - including Laserworld. Since its founding ten years ago, the manufacturer and distributor of show lasers has participated in the trade fair every year. Norbert Stangl, Chief Marketing Officer…
more
Exhibitor

The Bohemian city of České Budějovice, or Budweis, is the original home of Budweiser beer, making it perhaps the most famous brewing town in the Czech Republic. Epitomised today by Budweiser Budvar lager, they’ve been brewing the Beer of Kings there for 750 years, and KVANT was there to raise a glass in celebration. Together with the Budvar brewers and Art4promotion, KVANT Lasers put together a first-class event to celebrate the anniversary in style, including a laser show, video mapping, and fireworks. Equipment used included seven Spectrum 20W, one Spectrum 30W, six Maxim 8W, and one Maxim 20W. For the 3D-mapping, the lighting technicians used five 15,000 and two 16,000 ANSI projectors. 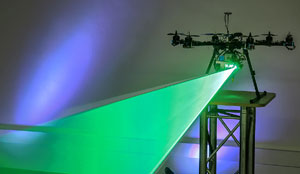 “As kids we used to play with flashlights and remote control cars. Now we are grown and wise men and we came up with a laser hexacopter. It’s so cool and KVANT,” wrote Slovakian laser manufacturer KVANT on its Facebook profile, introducing its latest big boys’ toy. The flying laser show is our gadget of the week! 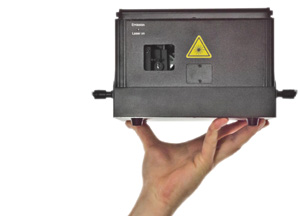 The laser manufacturer has now brought a new product line to market: the Pure Diode Series, designed to bridge the gap between entry-level and professional systems. Its flexibility makes it particularly suitable for club operators and mobile DJs.