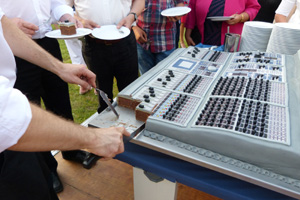 2013 was a triple good year for the Salzbrenner Stagetec Mediagroup. At the beginning of July, the Stagetec Developement Association for Professional Audio Technology celebrated its twentieth anniversary. In September it was Salzbrenner's fiftieth anniversary of the businessman Friedrich Salzbrenner laying the foundation stone for the media group. Just a few days ago, the third member of the media group celebrated a birthday. The Delec Audio and Video Technology GmbH turned 25. There's no shortage of highlights in 2013 for the consortium, and in 2014 there are more exciting projects.