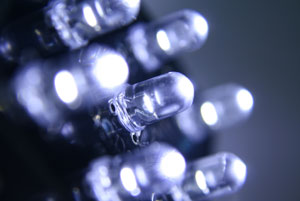 TVs, smartphones, brake lights, torches, light bulbs; at events like the theatre, at trade fairs, even in nightclubs: LEDs have become an inescapable part of everyday life. Prolight + Sound showcases the cutting edge in lighting developments every year. LEDs can emit red, yellow, green, white, and also blue. But producing LEDs that could emit blue light proved to be a massive challenge. Until, that is, three Japanese scientists - Isamu Akasaki, Hiroshi Amano and Shuji Nakamura - finally managed it, an achievement which has seen them awarded this year’s Nobel Prize in Physics in Stockholm.
The selection committee noted that: “Red and green diodes had been around for a long time but without blue light, white lamps could not be created.” Their revolutionary breakthrough made these “long-lasting and energy-efficient” and hence environment-friendly white LEDs possible. The highest award for physicists includes prize money of 8m kronor ($1.1m or £700,000).