The Opus Award is presented annually by the German Association for Event Technology and Media (Verband für Veranstaltungstechnik und Medien - VPLT), the European Association of Event Centres (Europäischer Verband der Veranstaltungs-Centren - EVVC) and Messe Frankfurt in recognition of outstanding achievements in the fields of staging, technical implementation, stage and set design and lighting design. The Opus Awards will be presented on 27 April 2023 during Prolight + Sound, the leading international trade fair for event technology.

This year's award goes to the Staatstheater Kassel for its 'Pandaemonium', a completely new kind of box theatre concept that uses a variety of stage surfaces and visual relationships to bring the audience very close to the action.
The special feature of this ingenious construction was the large distances between the seats, which allowed large opera productions to be staged even during the time of the Corona pandemic.
For example, operas such as Wozzeck and Tosca could be performed with orchestra and choir in front of the audience at the Staatstheater Kassel.

The harsh restrictions in the last two years of the Corona were a heavy blow to the event industry. It is all the more gratifying that the creative force has generated new ideas among many of those responsible for the arts, culture and stage industry.

The "Pandaemonium" of the Staatstheater Kassel is a symbol of the forward-looking approach to the challenges of the crisis. The team around Florian Lutz (artistic director of the Staatstheater Kassel, director of Wozzeck), Sebastian Hannak (set designer) and Mario Schomberg (technical director) was able to explore new forms of use and play in the theatre and successfully implement a visionary concept for theatre operations, in addition to large time windows that also offered maximum planning security.

The stage superstructures have a total height of 7.90 metres and are connected to the side stages by a 16 metre long catwalk running diagonally across the main stage area. 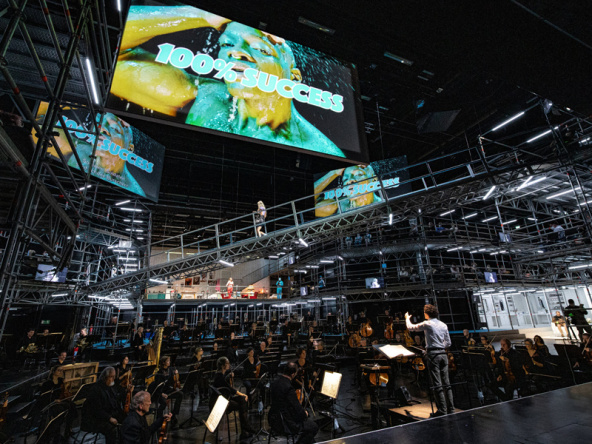 The total scaffolding for the PANDAEMONIUM was over one hundred metres long. Photo: Sebastian Hannak

The orchestra found its place in the centre of the stage, while the audience of up to 270 was distributed around the stage area on three levels of the complex construction. The spatial concept allowed the performers to move freely throughout the installation, creating new opportunities to involve the audience in the production.

In addition to the screens, numerous flat screens ensured that the action on stage could be followed from every seat.

Video concept and video design for both opera productions are by video artist Konrad Kästner.

The planning and preparation of the project required new approaches, as the pandemic meant that this had to be done digitally as well.

Vincent Kaufmann, a member of the "digital.DTHG" project team of the German Theatre Technical Society, designed the project virtually and accompanied the entire production process from the first sketches to the construction rehearsal to the premiere - digitally. In an era of limited face-to-face contact, this was the only possible approach and a fundamental basis for the successful collaboration of all those involved.

Architect Oliver Mann supervised the project as site manager, Björn Schmidt-Hurtienne from EHS was responsible for the statics, and workshop manager Harald Gunkel was in charge of the entire stage design implementation. Karl-Walter Heyer, as head of the sound department, and his team were responsible for the operation of the sound system. Andreas Lang, head of the theatre, and his stage managers, as well as his colleagues from the stage technology and props department under the direction of Anne Schulz, did a great job in preparing and supervising the Pandaemonium.

Opus Award - an integral part of Prolight + Sound since 2002

Since 2002, the tradition-steeped Opus Award has been an integral part of Prolight + Sound. The Opus is sponsored by the Association of Event Technology and Media (VPLT), the European Association of Event Centres (EVVC) and Messe Frankfurt.
A jury of experts made up of members of the association, industry experts, media representatives and representatives of Messe Frankfurt selects the winner.

All further information about Opus and Prolight + Sound can be found at www.prolight-sound.com.