The Swiss company NÜSSLI is known worldwide as an event construction partner for the largest temporary stadiums. This year, for example, the Eidgenössisches Schwing- und Älplerfest (ESAF) took place in Pratteln. The ESAF is the best-known sporting event in Switzerland, with 280 wrestlers, 380 hornussers and 100 stone-pushers competing in the Swiss national sport. The event takes place every three years at a different location in Switzerland, attracting plenty of enthusiastic supporters. In Pratteln alone, 400,000 spectators were expected. Since then, the organisers have relied on the temporary facilities from NÜSSLI.

Due to the changing venues, the temporary stadium construction from NÜSSLI is used. The arena thus moves on every three years. For the 50,900 spectators, the world's largest temporary stadium was thus built within nine weeks in Pratteln in the Basel area. And all that for just two days of festivities.

"The hexagonal festival arena - with a circumference of 800 m, a diameter of 250 m and a roof height of 17.5 m - will offer the 50,900 spectators a view of the sawdust rings with covered and uncovered seating and standing room," explains project manager David Frei.

The structural elements used for the construction of the six grandstands can be reused several times and thus enable flexible assembly and dismantling and use on site and are sustainable at the same time. The grandstand materials, which weigh approximately 3,000 tonnes, consist of a substructure, roof elements and seats. Many of the elements used were already used at previous wrestling festivals in the construction of the festival arena. 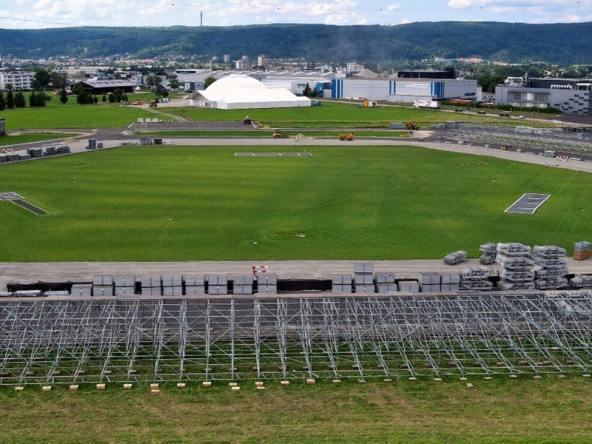 A total of 300,000 individual parts were assembled to build the arena. The ten-man NÜSSLI project team was supported by a 100-strong team of helpers from the Swiss army and civil defence. At peak times, 300 helpers were at work at the same time.

However, the temporary facilities are not only used in Switzerland, NÜSSLI installations are also popular worldwide. At the EXPO 2020 in Dubai, 10 national pavilions were realised by NÜSSLI, made more difficult by the Corona pandemic. 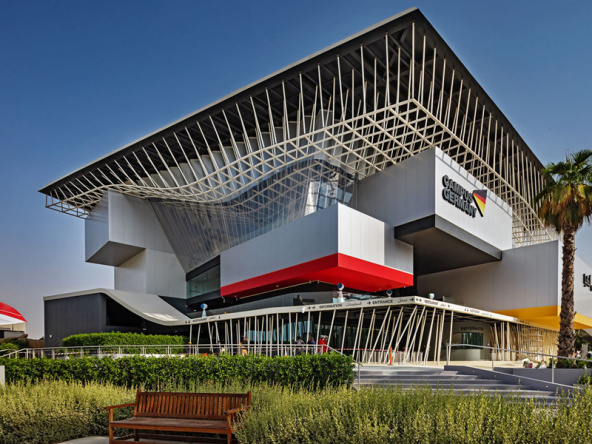 There were 32 nominations for the national pavilions, resulting in 5 BIE Awards and a further six winning awards and twelve runners-up.

Germany and Kazakhstan received Gold and Silver in the Theme Interpretation category. Gold also went to Japan in the Exhibition Design category. In the Architecture category, the pavilions of Austria and China won Silver and Bronze. The winners of the Expo Awards include Germany, Austria and Kazakhstan. The Austrian pavilion "Austria makes Sense" consumed 70 % less energy than comparable buildings.

The grandstands and arenas designed and assembled by NÜSSLI can be planned for a wide range of events. Whether standing stands for 100 spectators or a stadium for 50,000 visitors. Installation on even the most difficult surfaces is no problem.

The experienced staff install safe audience seating even on snow-covered mountain slopes, in water or in listed sites.