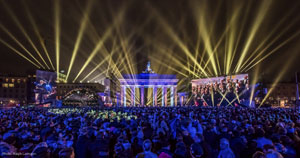 The fall of the Berlin Wall, which until then had divided Germany into East and West, on November 9th 1989, was one of the defining moments of recent history. There was no question then that the 25th anniversary was to be marked with a fitting celebration. One of the highlights of the day was the release of the ‘border of light’, 8,000 illuminated balloons marking the wall’s course across nine miles of central Berlin. And of course the Brandenburg Gate was a key part of the festivities, with visitors from the world over captivated by a fantastic light show.

“The Brandenburg Gate should be enhanced rather than overshadowed by technology,” said lighting designer Björn Hermann, who decided to implement the accompanying lighting installation using 27 Clay Paky Supersharpy and 12 Clay Paky Mythos spotlights. “They are compact, so they were easy to install on the towers behind the gate, which meant that all the equipment was kept in the background.”

Above all, 3D effects were of critical importance to Hermann: “Obviously, the Brandenburg Gate was the star of the show, and needed to be placed centre stage. Using LED floods, blinders and strobes we were able to light up several layers and produce the desired effect. During the symbolic opening of the wall represented by LED walls, the sun literally rose behind the Brandenburg Gate.”

It wasn’t just the thousands of onlookers who were moved by the event - Hermann was too. “Obviously, for me personally it was something special to be responsible for the lighting for an event that will not just be seen around the world, but one that has a personal meaning for me as both a German and now a Berliner as well.”

Media Pool ran the production, with artistic direction by Sven Sören Beyer, whose past credits include illuminating the German Chancellery and an Opus Award at Prolight + Sound 2013. 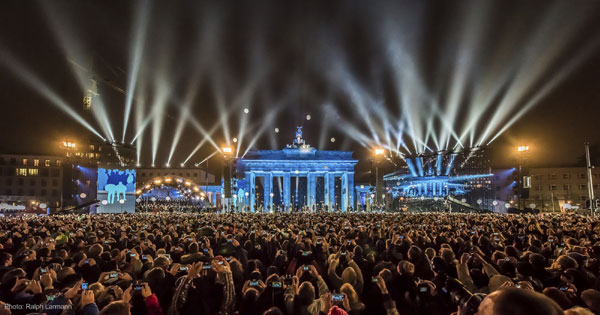 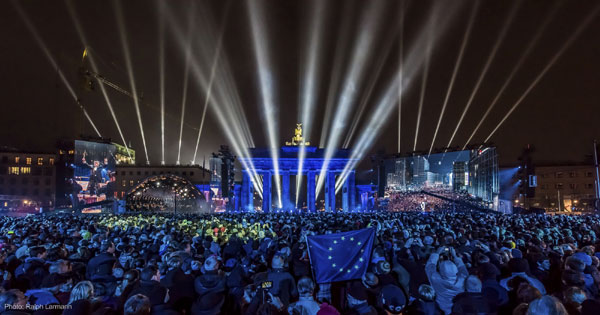