In Aisne, France, in the Hauts-de-France region, DJ and music producer Michael Canitrot presented another innovative monumental show with the help of Robe lighting's powerful moving lights. This time in front of the stunning Notre-Dame Cathedral in Laon. Started during the Covid lockdown, the Monumental tour was born out of his love for music and monumental architecture, and as a result combines live music performances and visual collaborations with impressive sites across France.

Together with the design collective AV-Extended, a gigantic musical performance was created under the direction of Jérémie Bellot: A projection on the 56-meter high facade of the cathedral was shown, combined with a light show designed by Mikael "Mika" Trochu with 56 Robe moving lights.

Already the year before there was a series of unique and site-specific performances. These could be admired at some of the most spectacular landmarks and monuments throughout France.

Power, brightness, impact and dynamic functions combine the Robe FORTEs and MegaPointes. They were installed around the facade of the building, on the ground and on a balcony at a height of 50 meters and were a good choice for this purpose.

Multi-layered effects on the cathedral, including the two main facade towers overlooking the old town of Laon and striking beams shot into the sky, were thus realized.

At the front of the building and on both sides of the stage, seven MegaPointes were used, as well as others on the garden and courtyard sides. Lined up side by side on special platforms, they visually highlight and structure the walls of the cathedral, including the vaulted ceilings of the two large recessed side doors.

On the front balcony, 15 MegaPointes were used to color the top half of the facade and the rear walls, casting piercing beam effects on the city at night. Installation was painstaking and complex: Technical teams had to gain access to the balcony and carry each spotlight by hand up a network of narrow, winding stairs to the second floor and beyond to the MegaPointes, which were positioned even higher up in the two towers. 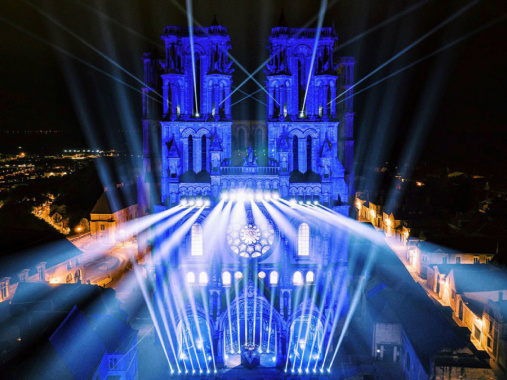 Five MegaPointes were placed in the top of each of the cathedral's two towers, 20 meters above the balcony. These were used to illuminate the underside of the vaulted ceilings of the towers and were able to add depth and volume to the video mapping in this area and to the overall image!

Three FORTES were used by Trochu inside the cathedral: one in the center to light the main rosette, and the other two on the left and right to backlight the two lancet windows of the facade. Another eight FORTES were positioned at the back of the forecourt behind the spectators at the level of the control room - thus also illuminating the artist.

What Trochu himself says about the lighting design

Trochu explained that the power of the FORTEs allowed him to "structure the cathedral's facade both in the quiet moments, but also allowed it to make big statements in the intense moments of the narrative."

One idea of the lighting design was to fragment and "cut" the facade vertically to create the illusion of parts disappearing or being removed from the overall image through the contrast between the lit and unlit areas.

"The accuracy and flatness of the FORTE iris at 100% aperture and zoom just blew me away," Trochu says. He feels that no other fixture would have offered better functionality in these two areas - performance and linearity/accuracy of the shutters. Trochu also appreciated the gobo and effects wheels, which he called "incredible".

The programming and control

He used a grandMA2 console to program and control the lighting, and all lighting equipment was supplied by BDL Event Group.  A team of eight lighting, video, audio and power technicians, including AV-Extended's Jérémie Bellot and technical director Martin Javouret, were on the job for two days. They worked with a local crew of stagehands.

This unique musical and visual show in Laon Cathedral was witnessed live by over 2,500 spectators on the forecourt. Built in the twelfth and thirteenth centuries, the cathedral is one of the most important and stylistically consistent examples of early French Gothic architecture.

The Monumental tour began in the summer of 2021 at the Phare des Baleines, on the Ile de Ré and the previous performance at Laon Cathedral took place at the Chateau de Pierrefonds, in the picturesque Oise region. Trochu Robe used moving lights for all of these monumental performances.