Watch parties of sports events, open air concerts or festivals all cannot be realized without video walls. Huge LED displays makes it possible for everyone in the audience to have a view of the artists and athletes – and give the artists yet another surface for their creative shows. Layher has developed a flexible video wall system so that the LED video walls can be adapted flexibly and individually to the situation on the ground. 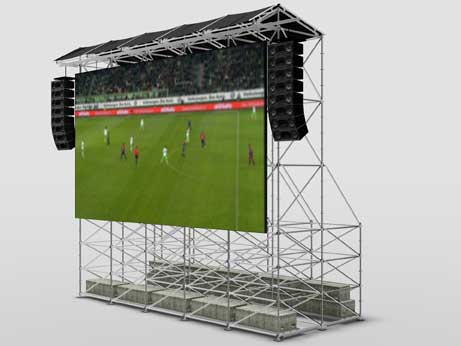 The basis of the video wall system is Layher’s versatile “Allround” system, which is also put to use in (tri)stage and podiums. The Allround Scaffolding is a winner with its high load rating, quick set up and dismantling as well as its ability to be stacked. Thanks to additional system aspects, the underlying construction can be used for video wall formats with a load rating of 5 kN/m and used, its safety documented by tests, without additional wind strength limitation.

Because the Allround Scaffolding is based on modular construction, the video wall system can be set up on location on the basis of the demands and needs. In addition to the LED panels, cantilevers with a load rating of 5 kN each can be integrated on both sides and be used to expand the field for PA systems on both side.

The video wall system also offers the possibility to expand with a platform that serves as a podium and simultaneously eases construction. In addition, the underlying construction can be combined with the canopy: either above the integrated, light aluminum keder rails for the uses of a keder canopy, with covers, or with Layher’s own protect system. An effective protection from the weather is offered thanks to these canopy possibilities.

The Wilhelm Layher GmbH & Co KG has been winning over clients for over 70 years with constructions and products made in Germany. With its headquarters in Güglingen-Eibensbach, the family-run company has been devoted to scaffolding since 1945 and has been continuously investing in research and innovation. Milestones in the company history include the development of the Layher Allround scaffolding, with its bolt-free wedge joint technology and eight connections on a single level surpassed the conventional scaffolding construction with tubes and joints. Since then, this construction style has been increasingly been put to use and as of 2013 has also been available in a lightweight generation, reducing set up and transport costs.