Colorful, intense and unique - that's how Ed Sheeran's shows can be summed up. With his "+-=÷x"-Stadium World Tour exactly these attributes should be fulfilled again. At the same time, the focus on the fans could not be forgotten - to make a performance in a gigantic stadium as intimate as a show in a cozy backyard pub. A real challenge!

For the design, the world star relied on Mark Cunniffe's breathtaking production and lighting design. The creative mind succeeded in creating a concept that caused a sensation with its elements and at the same time reached a new level of innovation and aha-effects in the world of 360-degree stages. The lighting designer relied on a complete grandMA3 system to control lighting and video.

To create these special effects, Mark specified two grandMA3 full-size and two grandMA3 light consoles with six grandMA3 processing units, all controlled by the grandMA3 software. In the stage area, Mark Cuniffe also broke new ground. Thanks to six striking 32-metre high masts, a tidy and reduced stage area was created in the middle of the stadium. This created a suitable location to accommodate the audio and lighting systems, as well as six double-sided video walls in plectrum form.

Quick assembly and disassembly of the stage system 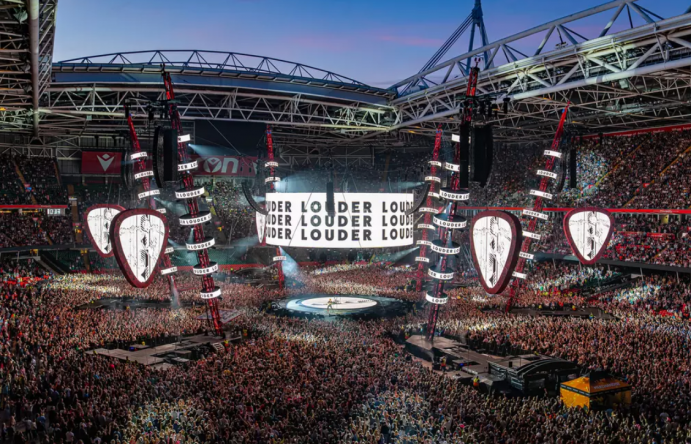 Seven concentric scenic rings complement each pole, both playing video content and serving as supports for the majority of the lighting. At the same time, the masts are interconnected and safely accessible to technical staff thanks to a giant wire mesh stretched with cables. This preserves sightlines without leading to obstructed views from parts of the truss or floor supports. The team, consisting of Jeremy Lloyd of Wonder Works and Rasti Bartek of engineering firm Cundall, further developed this idea into a stage system suitable for touring, which Stage One is realizing. The entire construction can be set up in just 2.5 days and dismantled in one day.

Thanks to 300 moving lights, the stage shines in unique light during the show. The setup is complemented by 520 video fixtures, in addition to video playback and the IMAG mix - edited by Phil Mead - played over six HD tracks via four Disguise media servers. 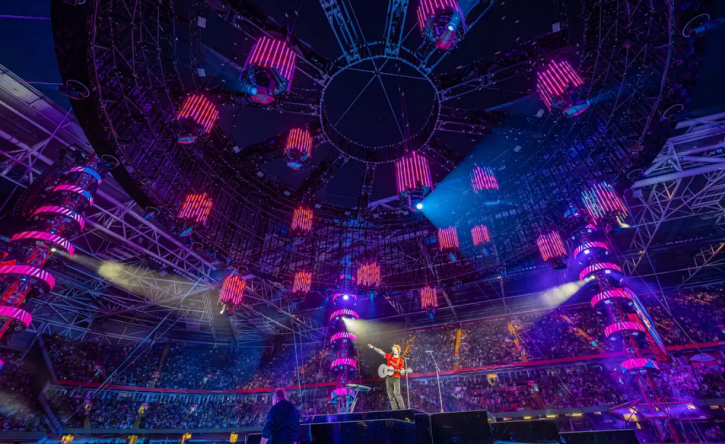 About The Blog, Stars & technics