The Infinity Screen by Samsung at SoFi Stadium in Los Angeles, is the world's largest and most highly advanced LED screen ever used in sports and entertainment. It is also the first and only 4K end-to-end video production in a stadium.
The mega-installation has a double-sided LED display covering 6,500 square feet and nearly 80 million pixels spaced 8 millimeters center-to-center. Each LED module can be individually or congruently populated with game statistics, live and/or animated content. The system is controlled by Sports Signage's largest graphics control system to date.

Samsung is known for borderless diplays

Its name, Infinity, grew out of Samsung's long history with borderless displays and the unique design of its video wall.

After all, Samsung is known for its infinity displays, and the Infinity Screen in the SoFi Stadium is no exception.

Located 122 feet (about 37 meters) above the field and 70 feet (about 21 meters) below the canopy, the Infinity Screen features the largest LED playback system ever deployed.

The largest of the panels is as tall as four stories, standing nearly 12 meters tall. The "smaller" panels are still as tall as two stories at nearly 6 meters. With its unique shape and size, the screen is also 1.2 times longer and 1.5 times wider than the pitch itself.

View from any point in the stadium

The shape of a double-sided LED ellipse gives all spectators an optimal view of the digital signage installation. The different sized LED modules guarantee a perfect viewing experience for all visitors, from every seat in the stadium.
Teams on the sidelines and fans seated in the lower part of the stadium will see the inside of the screen as it is directly opposite their line of sight, while guests in the upper part of the stadium will see the outer panels of the video board. 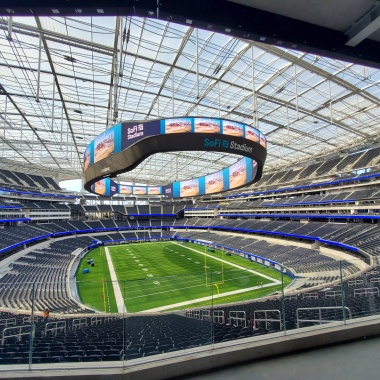 Additionally, the LED wall was equipped with a state-of-the-art JBL audio system.
Of the 4,500 speakers installed in the stadium, 260 speakers alone were integrated into the screen. With half a million watts of power (out of a total of 1.3 million watts), the digital signage content will be impossible to miss.

More than 2,600 large-format screens, LED ribbon boards and audio equipment round out the experience for spectators at SoFi Stadium and Hollywood Park, a nearly 300-acre sports and entertainment center.

But Prolight + Sound has also already gained experience with large LED walls. In 2018, the largest mobile screen to date was presented at the trade fair.