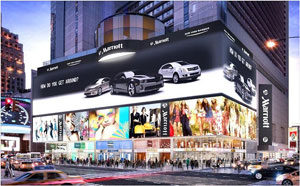 New York’s famous Times Square has a new addition: a billboard that breaks boundaries. It is eight stories high and the length of a football pitch. Its almost 24 million LED pixels light up Manhattan’s fabled tourist destination - a total of 2,300m2 of deluxe advertising space. This makes Mitsubishi’s Diamond Vision display not just the largest video display in the world, but also the most technologically advanced: a true first.

The display makes use of Mitsubishi Electric’s cutting-edge Diamond Vision technology. With a 10,048 x 2,368 resolution, it outdoes even the new 4K ultra HD format by 15 million pixels.

Real Black™ technology guarantees a high-contrast image with rich, deep tones, ensuring that the image is clear from up close as well as at a distance, and from all viewing angles, even in bright sunlight.

“We have worked on a number of record-breaking projects, but working with this type of pixel density and installing it in a 24/7 live environment presented unique challenges,” said Mike Brosko, operations manager at Mitsubishi Electric Power Products, Inc.

The giant screen also boasts a HD camera for capturing the crowds below, and can be used interactively, for social media, and live streaming.

“This innovative and thoroughly distinctive display establishes a new iconic landmark in Times Square while creating a powerful, value proposition for our advertisers,” said Coghlan. The billboard has already sold out through January 2015. The first advertiser to book the world’s biggest LED billboard was Google.