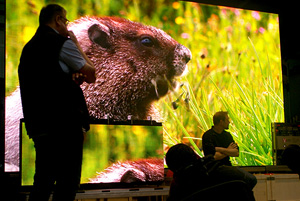 One of the first customers to decide for the new LED technology was Logando Display & Media Solutions GmbH, a Leipzig-based service provider for events technology. “We focus on video and data technology, along with sound. Our aim is to ensure that our customers always have the latest - and expertly maintained - audio-visual equipment available. With the new V:LED VSF6 we have a first-rate product that we can offer to not only events and trade fair organisers, but also to quality hoteliers and private individuals,” said Logando MD Alexander Lotozki.

With that, nothing stands in the way of a fantastic summer of football – on the technical side at least. Now it’s down to the German national team to bring this World Cup to sporting perfection as well.