Gadget of the Week: Disco Ball on Four Paws 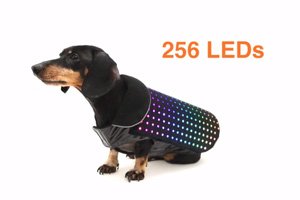 A dog is a man’s best friend; LEDs’ share of the lighting market has been steadily increasing for years. So … why not combine the two, and create one totally crazy gizmo that mankind might not necessarily need, but can’t help but want? The creative minds at PARTY, a collective of designers and engineers from New York and Tokyo, may well have been thinking along those lines when they created Disco Dog. Disco Dog is a dog vest that does more than just keep Fido warm: it turns him into a four-legged disco ball.

256 RGB LEDs enable the vest to display lighting effects, animations, and writing in a multitude of colours, all controllable using an Android or iOS app and a Bluetooth connection. That means Rex can strut in style - and safety. In the dark, those LEDs mean your four-legged friend will always be visible. And the vest has a trick up its sleeve (as it were): if your pet pooch wanders too far, ‘LOST DOG’ will flash up on the LED display, so everyone will know that dog and master are trying to find each other.

PARTY needed to raise a total of $15,000 on Kickstarter to make their project happen. With 15 days remaining, they have already raised more than $18,000, so the project is already looking as fit as a butcher’s dog. The vest will be available in three sizes, with the smallest starting at $300. If you want to make sure of getting your own Disco Dog, the Kickstarter runs until 12 April.