Multitool gadgets are simply one of the everyday essentials for many event technicians and craftsmen. However, in Germany these “jack of all trades” at the ready can also cause trouble with the police. It is the case that multitools can – in some cases – fall under laws governing weapons and therefore are not allowed to be carried in public.

Multitools as pocketknife – The legal situation in Germany

The German law regulating weapons – valid since 2002 – contains paragraph 42A, which forbids

1) Items that look real weapons deceptively similar
2) Weapons for cutting and thrusting
3) Knives where the blade can be locked with a single hand (combat or technical knife) or fixed knives with a blade longer than 12 cm.
(§42A Abs. 1 WaffG)

Multitools whose blades can be opened and locked with a single hand can fall under the category of “single hand knife” and cannot be carried openly – for example on a belt. A newsletter from the German Police Union (Deutsche Polizeigewerkshaft) contains the following on the topic of multitools: 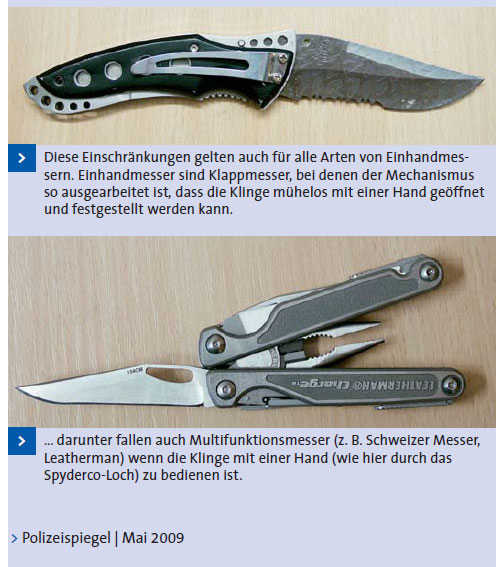 These restrictions also apply to all kinds of “single hand knives”. These are pocket or folding knives in which a mechanism works in such a way that the blade can be opened and locked effortlessly with a single hand.

… this includes multifunction knives if these can be operated with a single hand.

According to the law (§42A Abs. 2 WaffG), these tools cannot be carried publically, except if they are

or there if there is

Lawmakers have defined legitimate interest as given “when carrying the object takes place in conjunction with one’s profession, cultivation of customs and traditions, sports, or a generally recognized purpose.” (§42A Abs. 3 WaffG)

According to this definition, event technicians and tradesmen can carry multitools when they need them for their profession. The use of these tools is unproblematic at events, shows or on construction sites.

On the way to work – the legal gray zone 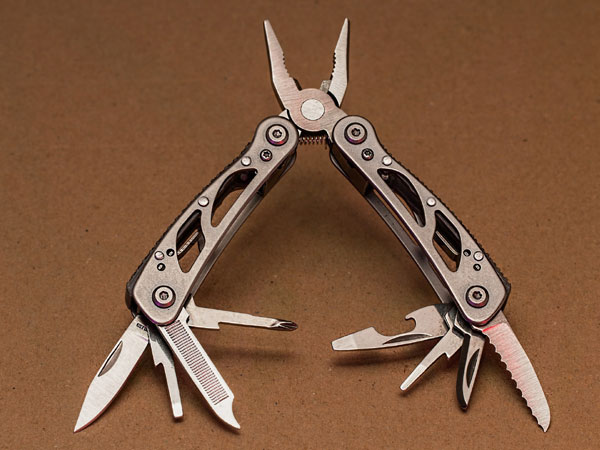 The legal situation becomes murky on the way to work. Thus this leads to the question of whether the multitool can be worn to and from the location of the event.

Here the question of jurisdiction is problematic. Correspondingly, in an interview with knife-blog.com, the German Federal Criminal Police Office referred to the jurisdiction of the respective authorities on the ground.

The press office of the Bavarian Ministry of the Interior explains in the Knife Blog that in Bavaria the conjuction is related, if ...

... the object is required for the pursuit of the profession and the management also has a temporal-spatial connection with the activity. Therefore, for example, it is also possible to pick up and return routes or trips to the customer, even if these are interrupted (the transportation in a belt pocket is included). The assessment as to when an exemption from the law applies is always based on the circumstances of the individual case.

Safety first: put it in the toolbox

So the question of whether a multitool can be worn on a belt in public, it’s up to the authorities in the states and the local officials. Whoever wants to be on the safe side should simply put the Leatherman away.

A further possibility is to ask the responsible authorities whether the multifunctional tool can be carried on the way to work on the belt - so at least unattractive clashes with the police are avoided.