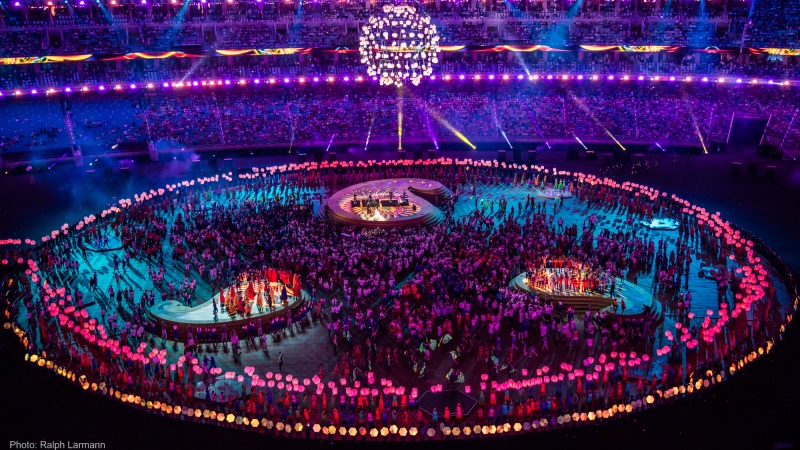 This June the inaugural European Games take place in Baku. Around 6,000 athletes from more than 50 countries competed in 20 different sports in the Azerbaijani capital. The games were organised by the European Olympic Committees (EOC) and the European National Olympic Committees (NOC). They ended on a high note with a spectacular closing ceremony, and the highlight of the event was an innovative 450m2 LED floor from Screen Visions.

Cirque du Soleil star James Hadley put on an amazing show in front of 68,000 spectators in the Olympic Stadium, encompassing all the colours, peoples, and traditions of Azerbaijan. To make it happen, the team working on the lighting, sound, video, and the stage set needed 800 speakers, 25km of cables, 2,000 lights and lighting effects, 12,000 in-ear-systems, and 120 pyrotechnic ramps on the stadium roof.

And the pièce de résistance, divided between three stages: an LED floor specially developed for the European Games. Its excellent non-slip properties make it suitable for use with a huge variety of events equipment – indoors or out. Contrast performance is excellent, with an output of 3,000 Nit and 140° viewing angles coupled with a 20-bit drive and all-new driver chip. The 50x50cm modules weigh in at only 10.5kg, making them easy both to transport and to install.

The Caucasus climate provided a stiff challenge for the LED flooring system, with temperatures reaching 45°C and humidity hovering around 60%. At some points, individual LED modules reached temperatures of 85°C – without performance being affected in the slightest. All in all, this is one innovative new product that has clearly earned a place at the top of the podium.