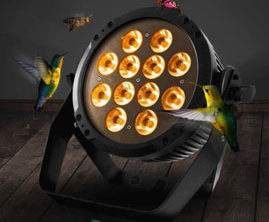 LED lighting technology has been moving forward at a dizzying pace, but even so, some technical problems have proven hard to crack. Including, up till now, mixing the colours orange, pink, and aquamarine using LED spotlights. Now the experts at Steinigke Showtechnic have brought a range of spots to market that can do just that. The secret of the new HCL (hexacolour) Futurelight and Eurolite spots? 6-in-1 LEDs with upgraded technical features.

The beam of the HCL spots is composed of a mixture of red, green, blue, amber, white and UV. Integrating amber and UV LEDs into the 6-in-1 LEDs not only makes the amber LEDs brighter, it makes previously impossible effects and colour mixes possible. Textures are made vividly real, and some colours literally sparkle.

Steinigke currently offers three different ranges incorporating the new HCL LED technology: the PRO Slim Par-7 and Par-12 by Futurelight are washers with 10 watt outputs per LED. They run silently, thanks to being fitted with cooling fins rather than fans. Another silent operator is the Futurelight POS-8 LED HCL Powerstick , which is a real space saver thanks to its narrow, extended build.

In addition, we have the third generation of the Eurolite Zeitgeist Spot-180. Also outputting 10 watts per LED, but built on a larger scale and this capable of lighting a huge area with just one lamp. Although it is equipped with a fan, the latest technology built-in makes inaudible at a distance of just one metre.

Seductive colours and extremely quiet operation – two qualities that make these spots from Steinigke perfect theatre and TV equipment. Those who wish to see the HCL light in person can experience these high-tech spotlights for themselves at the upcoming Prolight + Sound 2015, from April 15th to 18th at Messe Frankfurt.

Steinigke about the new HCL-Spots: