After almost two years of standstill due to the COVID-19 pandemic, the German trade show industry finally has a perspective: nationwide Corona restrictions are to be lifted as of March 20. This was agreed to by the minister presidents of the German states and Chancellor, Olaf Scholz, on February 16.

The resolution reached by the minister presidents with the Chancellor does not explicitly mention trade fairs. For this reason, several German states have already begun lifting restrictions on trade fairs. Lower Saxony and Baden-Württemberg were the first major trade fair states to lift their trade fair bans.

Baden-Württemberg dropped from alert to warning level on Feb. 23, so trade shows there are now possible under 3G conditions (vaccinated, recovered or negative test required). Lower Saxony also ended its so-called hibernation on February 23. There, too, fairs are now possible again under 3G access rules. The North Rhine-Westphalian state government lifted the ban on major consumer fairs on February 19. In Saxony, the ban on trade fairs had already been lifted prior to the decision taken on February 16.

A constantly updated overview of state regulations on trade fairs was provided by the Ausstellungs- und Messe-Ausschuss der Deutschen Wirtschaft e.V. (AUMA) on its website.

The federal and state governments have also decided that a majority of the restrictions will be lifted in three steps by March 20. Some restrictions have been lifted with immediate effect, including access restrictions for visitors and exhibitors and capacity limits for exhibition halls. In fact, the decision now explicitly imposes restrictions only on mass events, which do not include trade shows - as already decided in May 2020. 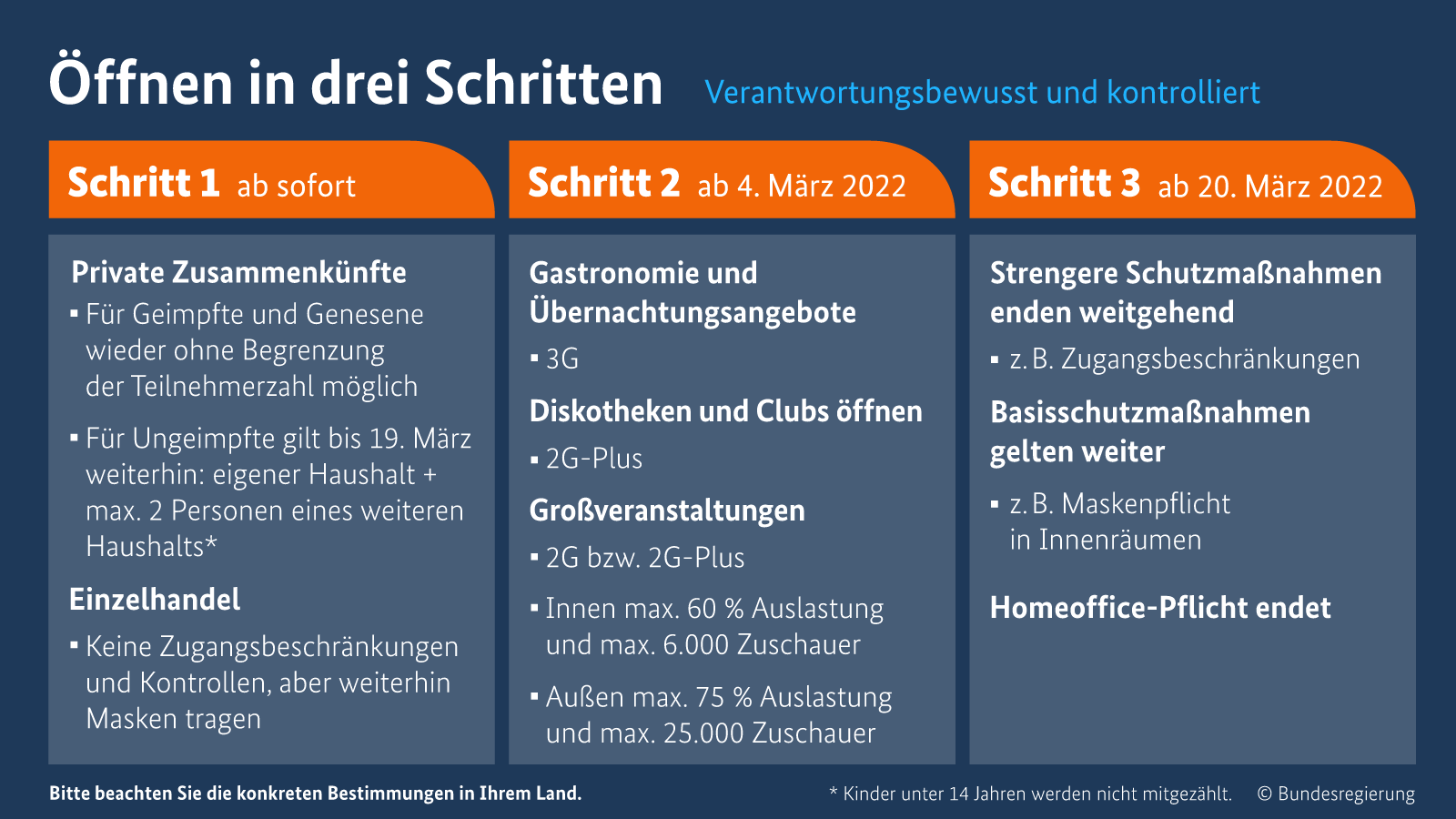 After March 19, only basic protective measures will be possible. These include masking and general standoff requirements.

Loosening of travel restrictions and in hotels and restaurants

.
Entry into Germany will also be eased. High-risk areas will be cancelled, according to the decision. This is already seen for 20 countries in recent days. For the trade fair industry, this means that many foreign trade fair participants who have been vaccinated with vaccines not recognized in Germany will be allowed to enter the country without a 5-day restriction.

There is also positive news for the hotel and catering industry: Starting March 4, access to restaurants and accommodations will be allowed for those vaccinated, cured and tested (on a daily basis). This means that trade fair visitors from abroad who are considered unvaccinated can once again stay overnight in hotels and restaurants in all federal states.