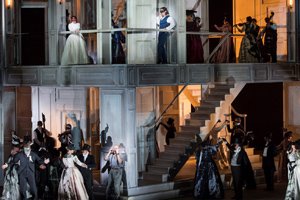 The Royal Opera House in Covent Garden is one of the most prestigious in the world. Each year, more than 400 performances entertain a total audience of 650,000. With such a high reputation, every last detail has to be perfect, each performance must be 100% - from the individual singers to the set, the stagecraft, the lighting and the acoustics. When it comes to lighting, for the past decade, the Royal Opera House has put its faith in the experts from Martin Professional – experts who also guarantee a great show at Prolight + Sound year in, year out. And for good reason.

The first Martin Professional lights were installed in the Royal Opera House in 2004, when ten MAC 2000s were fitted. Since many of its spots and other lighting fixtures had already seen their tenth birthday, the Opera House recently had 20 new Martin Professional MAC Viper Performance Moving Lights installed. Paul Hornby, the ROH’s lighting systems manager for the last 14 years, was more than impressed: “The Vipers are significantly faster, brighter, and more energy efficient than their predecessor.”

The new equipment has been installed in each of the ROH’s three main spaces – the main stage, the Linbury Studio Theatre and Clore Studio. “Most of our work happens on the main stage which has a new show every ten days. We have a main rig and additional show lighting bars which can be used when required.”

MAC Viper Moving Heads are joined by MAC Aura LED Wash Lights, which Hornsby selected due to the limited space in the opera house. “When we discovered the MAC Aura it was absolutely fantastic. Nobody notices the fixtures being there because they are so discreet and quiet, but still capable of producing the quality light we needed out front.” Just one light has had to have any maintenance done since August 2013. “With a rig that must work 15 hours a day, seven days a week, that really does speak for itself.”