"Sing mein Song - Das Tauschkonzert" is one of the most successful German music TV shows of the past years. The 6th season, which has just ended, ended for the first time with a live concert with all the artists. The live show in Berlin's Wuhlheide was mixed with two dLive systems from mixer manufacturer Allen & Heath.

Producer and developer of mixing consoles with many years of experience 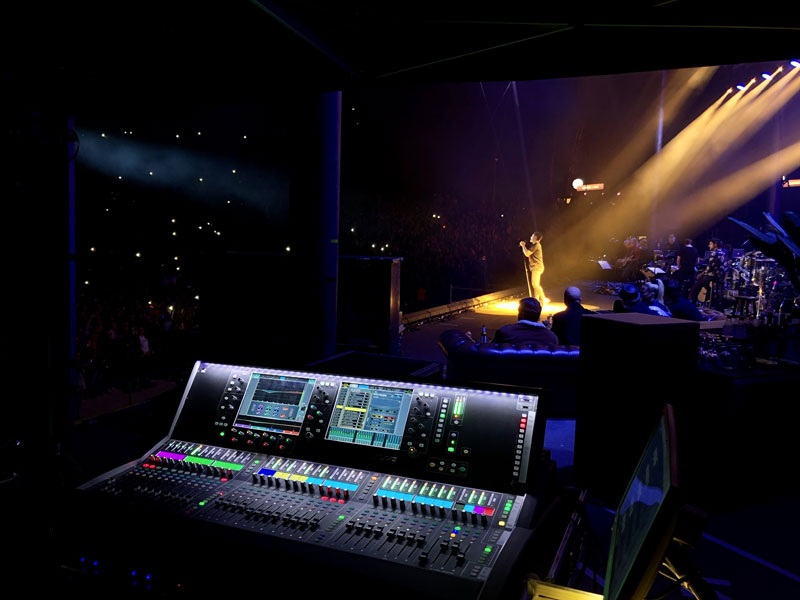 dLive system at Sing My Song

The live concert with all artists involved in the show was the highlight of this year's show. Daniel Lauer (FOH) and Sascha Kohl (Monitors), who have been working with Allen & Heath's dLive systems for years, were responsible for the mixing. According to Lauer, the realization of the concert had been a challenge for the organizers.

"The variety of songs and artists also presented us with a full spectrum of sound and dynamics to cope with, which was a huge challenge for us mixing the show, but of course also what made it interesting. The two dLive systems were an enormous help in dealing with those issues," he explains.

The size and special acoustics of the Waldbühne also challenged the sound engineers: "We only had one day of studio rehearsal for 25 songs, so we had to be able to adapt very quickly to any changes at soundcheck."

Two Allen & Heath dLive S7000 surfaces were used each paired with its own DM64 MixRack, equipped with Dante and SuperMADI cards. An IP8 remote control used on the FOH enabled eight additional fader settings. To power the in-ear monitors of all musicians, artists and crew, all 64 busses in the monitor console were needed.

"At monitors, the main focus is always to keep the artists comfortable and happy," explained Sascha Kohl. "A major element of the show is the famous sofa where the artists are seated and for the live concerts, we have this in the middle of the stage and not in front of the PA like in the TV show. That meant not only did we have to adjust the monitor sound of the performing artists, musicians and the crew but also for the artists sitting on the sofa. But with dLive we always have a trusted partner for these kinds of challenges," says Kohl.

Allen & Heath is a leading developer and manufacturer of professional audio mixing consoles for large events, tours and broadcasting as well as recording. The British production company based in Cornwall was represented at Prolight + Sound last year. Among other things, they presented some of their compact dLive Touring systems, which were also used at the live concert of "Sing meine Song".

Have you seen these beauties at Prolight + Sound this April? #pls2022