800 Years of Bielefeld: A Light, Music and Dance Spectacular 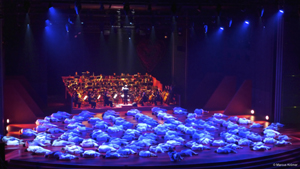 This year marks the German city of Bielefeld’s 800th anniversary, and they decided to celebrate in style: in the framework of the Zeitsprung – BI-Motion project (‘Zeitsprung’ – a leap back in time), 800 dancers and musicians put on an evening of superlatives in the Stadthalle Bielefeld. Participants included the Tanztheater Bielefeld; the Bielefelder Philharmoniker; Syrian clarinet virtuoso Kinan Azmeh; and amateur artists and schoolchildren. Technical support was provided by MA Lighting and Clay Paky, supplied by Lightpower. Markus Krömer, who was responsible for lighting design and programming, explained that “it was necessary to install an independent lighting system in the arena for an event with 800 people on stage, with the extension of the stage into the auditorium significantly increasing its area.”

“Due to requirements differing for individual scenes, and the limited rehearsal time, we relied almost exclusively on moving lights. What was important here was powerful colours and the ability to created well-defined structures using gobos. Clay Paky profilers were the perfect match.” The control system used a grandMA2 light and an MA onPC command wing, with the rig fitted out with lighting which included Clay Paky Alpha Profile 1500 beam shapers.

Lighting and rigging were installed in just a day and a half – a challenge, but a routine one for Krömer. “Since I’ve been using MA Lighting desks for 15 years, the grandMA2 was of huge importance given the short rehearsal time,” he declared. “I can operate the desk in my sleep, and it was the grandMA2’s theatre functions in particular, such as part cues, that were a massive help.”

Zeitsprung BI-Motion was performed to the accompaniment of thunderous applause. The 800 performers had done an outstanding job – as had MA Lighting and Clay Paky. On that note: well done all, and here’s to the next 800 years! 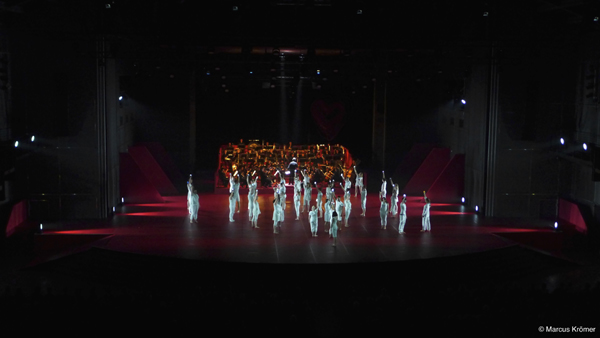