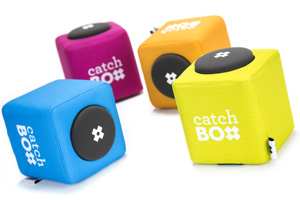 At first glance the colorful foam squares look like toys. However, they are filled with the most modern technology, microphone technology to be exact. Catchbox is the name of the world’s first throwable microphone. It is wireless, hard-wearing and made to fly across rooms. It is ideal for plenum interaction in conferences, classrooms, meetings and workshops. Under the colorful foam cover of Catchbox, you will find ingenious technology that is also a lot of fun.
A functioning microphone with a 2.4 Gigahertz frequency gives a crystal clear sound. If the Catchbox is thrown thru the room or falls on the ground, it automatically suppresses the sound, so that there aren’t any squeaking sounds. The Catchbox can be used anywhere in the world, without a special license, which is not the case with some other wireless microphones. The colorful throwable microphone comes with a separate receiver which can be connected to various sound systems, such as stereos, computers or other professional audio technology.

The three Finns Mikelis Studers, Timo Kauppila and Pyry Taanila developed the microphone. They were all too familiar with the problems surrounding discussions with a large plenum. While studying at the Aalto University in Helsinki they had the idea to develop a microphone which wouldn’t be handed off to the next person, but instead would be thrown. CEO Kauppila says, “In these times, when most information is distributed over the internet, we wanted to go back to the natural way. Where people are together in a room and have discussions.”

It seems the young company has succeeded. Their technology was tested at more than 100 events, including at the game app developer “Angry Birds” and the software company “Evernote”, and the verdicts were positive. The colorful throwable microphones are now available for order in the USA, Canada and Europe. The price is 349 Euros. 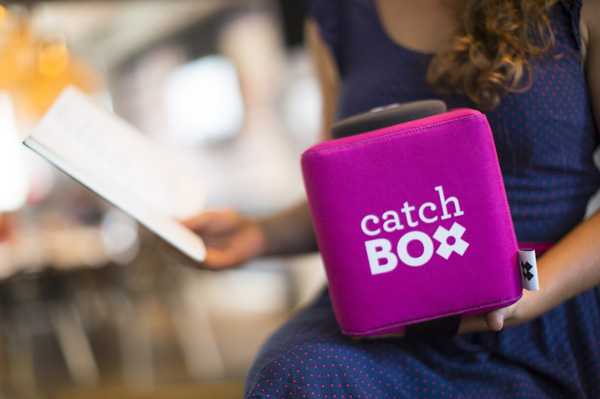