Christian Eigner: “You Can’t Replace Live Experiences with Anything”

At the age of 16 he already was on stage and belongs to one of the most successful British bands: Christian Eigner is a drummer, producer, songwriter and artist. With the British cult band Depeche Mode he celebrated international successes and is co-author of various, also Grammy nominated Depeche Mode songs. Recently, the Austrian-born producer has been on the road live with a solo tour and will perform a 30 minute excerpt from his current solo tour on April 27 at this year's Prolight + Sound at the Live Sound Arena together with Austrian Audio's technology. In the interview, Chrisitan Eigner talks about his experiences of the past years, his new projects and the cooperation with Austrian Audio.

1. You are currently with a solo tour to live performances on the road. Among other things, you will present a small excerpt at the Prolight + Sound. How is it for you to be able to perform live again? 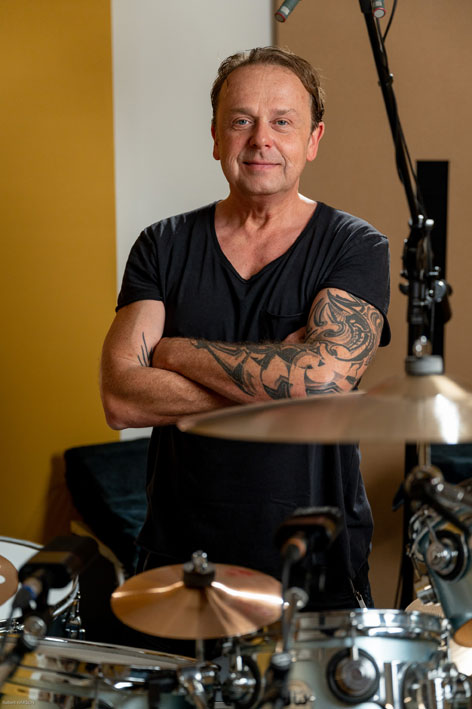 After it was quickly clear at the beginning of the pandemic , that it will take longer to be able to play concerts in normal size, I focused on the work in the studio. Only last year the idea to play live again on a smaller scale came, which means that I started again some time ago. Definitely a good feeling to get closer to normality, as I know it.

2. What is it that fans can expect at your solo performances?

Simply said- music.
It's all about tension building, dynamics and of course a lot of rhythm. I play songs that allow me to fully exploit the many possibilities of my instrument without having to think about the input of other factors, you can close your eyes and listen, or dance if you want... My live set is consciously music-oriented and thus really has nothing to do with a drum clinic or the like, that is a very important aspect for me.

3. Live performances are something special for many musicians - but concerts are always an absolute highlight for fans, too. How did you feel about the past two years, in which there were almost no live performances?

Honestly, very boring and uninspiring, not only for me, it seems.
You can't replace live experiences with anything, no matter how good your TV or home stereo is. That being said, it's time for more creative people to take the world stage again.

4. What opportunities did you have with other musicians - and your band - to still be musically active?

The positive thing at the beginning was, that you had to reorient yourself a bit. I was lucky enough to be able to continue working in my studio, albeit in a slightly different way than I was used to, which meant going back to basics and also recording myself again, etc....

Since I have been working with many people for a long time without being in the same room, not that much has changed.

But of course the personal and fast creative input is missing when you have to work like that, that's finally developing in the right direction again.
But I played drums on many productions during this time, worked as a producer and of course wrote songs, that simply can not be avoided. The only difference was that I had some time again to experiment with my instruments, to work on drum setups and also to develop new sounds.

5. With your new company, you create compositions from music and film. How did the idea come about? And to what extent do moving images influences your music - and vice versa?

Also a result of that time. I was interested in thinking in different musical arcs, working away from song structures can just be extremely exciting. And since I use a lot of other analog instruments besides my acoustic drums, I'm also interested in how moving images works with the support of real instruments. And also one of the reasons was that I just can't listen to those plastic sounding library sounds anymore. I don't know if my stuff will be better or even needed, but it's a lot of fun to try.

Apart from that I think it's always important to try something new, that's the only way to evolve, that's also one of the reasons for me to play drum shows without a band.

6. What role do technology and technological developments play in your daily work?

Technology is supposed to be a tool and also a toy. I can compare it to vocabulary...you need it to be able to say something, but if you don't have anything to say, it doesn't do you any good. 🙂

7. For your productions you use, among others, technology made by Austrian Audio. What makes this brand so special?

Microphones are, after all, the final transmission element from the musical instrument to the outside world- that is, no matter how long you've been a drummer, as in my case, how good your drums sound and you take all the components into account: If the microphone doesn't transport that then, you have a problem. Especially when it comes to picking up drums - whether in the studio or live - you don't want to experiment or mess with things after the fact.

With Austrian Audio's microphones, you don't have to - everything sounds exactly as it should. The Austrian Audio team simply knows all the factors it takes to get the job done, and aside from that, it's a company you simply enjoy working with.

8. What is it that makes the collaboration with Austrian Audio special for you?

I have never before worked so closely with a company that makes microphones. We also test new products in my studio during recording sessions, that means under really realistic conditions. And the fact is: I wanted to send the guys home after every test without their prototypes so far, to leave the mics right at the kit.....

What more can I say 🙂

9. What importance do trade fairs like Prolight + Sound have for you as a musician and producer?

An extremely high value! As I mentioned earlier, you have to be able to gain impressions, especially when it comes to music. I can often only do that when I'm in the same room with music...How are you going to listen to a PA on a laptop? Or to get instruments only online, in order to have to watch tutorials from some people afterwards, is also not purposeful for me. Music is and remains something personal, and nothing can replace the impressions you gain through listening experiences.