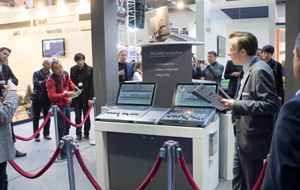 Prolight + Sound was once again a first class trade fair. At every stand there was another technological development to discover. In Hall 8.0 Salzbrenner Stagetec Mediagroup made sure that many eyes lit up at the premiere presentation of their new POLARIS evolution mixing console. The special thing about it; it is the first network mixing console which you can fully personalize. A good reason to take a closer look at this pint sized technological wonder.

POLARIS evolution has three main components, the POLARIS access control unit, the multi-user audio processor POLARIS scala and the POLARIS view touch screen extension. In a flexible building kit, all these modules can be used, in nearly any combination, within an IP-Network, no matter the location and can be used simultaneously for various mixing projects. That way the customer can choose and create the correct audio processing performance, with the needed numbers of faders and controls, for each project. 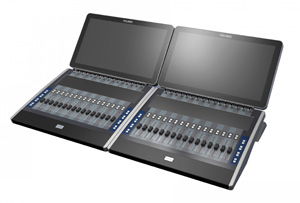 Mixing Consoles: The Next Generation

Another big plus, POLARIS evolution is expandable. Every new POLARIS module, that is added to the network, registers itself. The user chooses for which mixing process it will be used and if it is used simultaneously or as an addition, without doing a lot of configuring. The intuitive controls make getting started easy.

Just as it is not crucial how many computers are logged in on a computer network, it is does not matter how many modules are in the POLARIS evolution. They can be attached on any part of the network and be used alone or in combination. Concurrently, they have a true multiaccess capability, large variability and scalability, as well as a consistent IP network. The Salzbrenner Stagetec Mediagroup is confient, with POLARIS evolution the era of the IP networked mixing and audio processing systems have begun.

Those of you who could not be at the POLARIS evolution presentation at Prolight + Sound, can see the video here: