Together with Sennheiser, George Neumann, the world’s leading producer of studio microphones, is releasing a special bundle to celebrate its 90 years of existence: the microphone system evolution wireless ew 500 G4 is currently available with the Neumann true condenser capsule KK 205. The capsule heads were previously reserved for the Sennheiser 2000, 6000 and 9000 series. 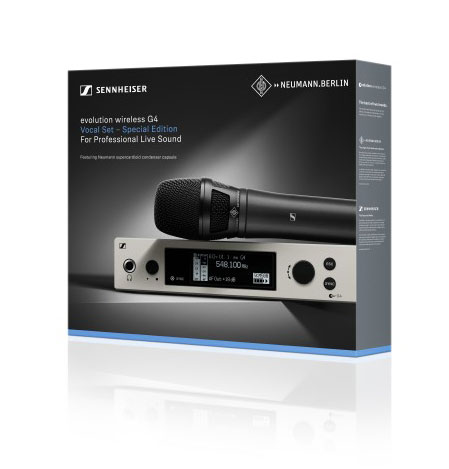 Neumann.Berlin became part of the Sennheiser Group in 1991 and has been contributing to the concern with its technical experience since then. Years of experience in the area of electro-acoustic transformer technology has been put to use in the area of studio monitors since 2010. Using its rich tradition, the company can also offer optimal solutions for clients from the fields of TV, radio, recording and production.

The Neumann true condenser capsule KK 205 contained in the anniversary set are based on the series of cable KMS stage microphones that received multiple awards. The capsule head has extraordinary clarity. This is where the characteristic Neumann sound originates: the direct, emotional sound is distinguished by high impulse fidelity and airy heights. A high amplification level as well as the reduction of adjacent noise sources on stage is facilitate3d by the true condenser capsule KK 205, which processes high up to 150 dB without a problem.

In addition, the bundle includes the wireless microphone system ew 500 G4, which offers a transmission rate up to 50 mW and a switching bandwidth of 88 MHz. This gives sound technicians enough flexibility, even with a heavily frequented spectrum. The system contains the handheld transmitter with capsule and microphone clip as well as the rack receiver with construction kit and network components. At the same time, ew 500 G4 is available in the standard UHF frequency range.