The Opus Award has been an integral part of the Prolight + Sound supporting programme for years. This year, two projects will be honoured with the "Opus – Deutscher Bühnenpreis". The winners this year could not be more different, but both have creatively dealt with the challenges of the Corona crisis in their own way. 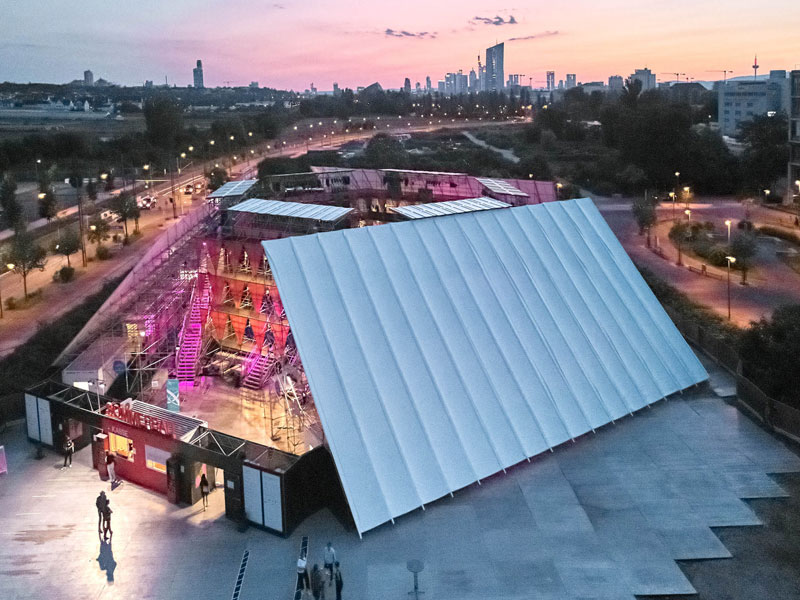 The first winner of the Opus is the "Dionysos Stadt Open Air", which in the summer of 2021, with a lot of courage and an impressive backdrop, made art and cultural experiences possible for a larger audience while respecting all restrictions.

In an almost ten-hour theatre marathon spanning the history of gods, heroes and mankind from Zeus and Prometheus to Achilles, Helen, Cassandra and Electra to the present day, the audience was finally able to experience culture again. In the Kaiserlei district between Frankfurt and Offenbach, director Christopher Rupien thrilled the audience with a version of the multi-award-winning production by the Munich Kammerspiele specially adapted to the spectacular open-air "Sommerbau" logentheatre. The play was initiated and produced by Frankfurt's Künstlerhaus Mousonturm.

The impressive ambience of this temporary venue, designed by the architects and artists group "raumlaborberlin", allowed for larger audience events under strict hygiene conditions. The round building with six corners and three mighty side wings, created with geometric shapes, provided space for around 350 spectators. For 200, there were covered 2-seater boxes on three floors. In the middle, they created a large arena with a diameter of over 25 metres. 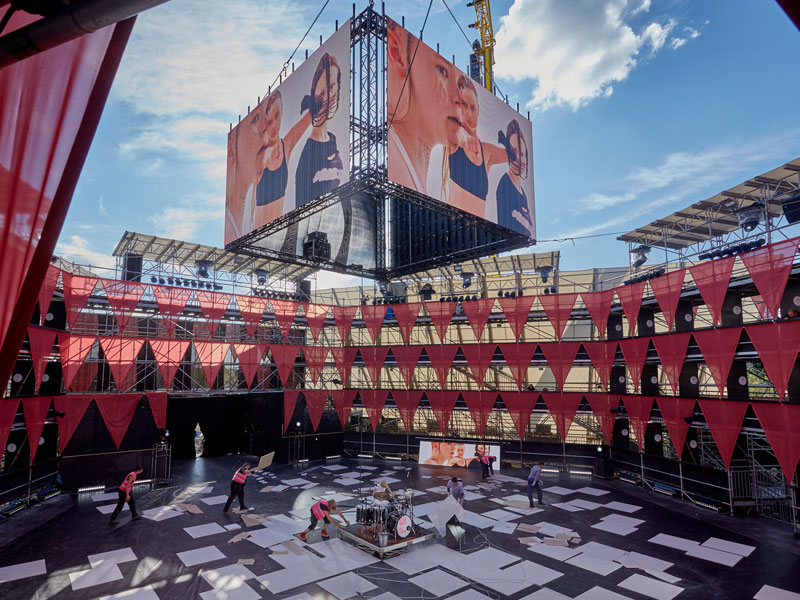 Since this summer construction is an open-air arena where no laced floor was available, a crane was integrated into the staging to lower or raise the Prometheus cage, for example.

Another challenge of the ten-hour marathon was that lighting scenes could only be realised in the late evening hours, so it was primarily the responsibility of the actors on stage to keep the audience excited for many hours of this mammoth production, which they succeeded in doing impressively.
The courage to set up the temporary venue as well as the choice of the challenging material made for an extraordinary overall experience under challenging circumstances, which paid off in the end.

New technical territory was entered by the creators of the project "Woodkid @ ZDF Magazin Royal", who made a virtue out of necessity and created a completely new augmented reality experience. 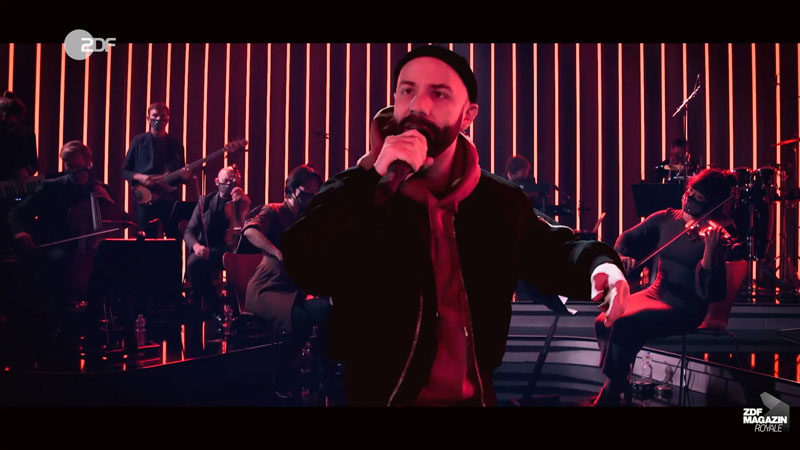 As a result of a lockdown at Corona Winter 2020 in Paris, artist Woodkid was unable to travel to Cologne for an appearance on ZDF Magazin Royale. So those responsible decided on a highly complex and unprecedented solution to the problem.

By means of a photogrammetric process, it was possible to make an augmented reality version of the artist Woodkid appear in the studio for a joint performance with the Rundfunk-Tanzorchester Ehrenfeld. For this purpose, the artist was filmed in a studio in France with countless cameras. Afterwards, his body was reconstructed image by image as a 3D model, which was placed in the studio in Germany with the help of augmented reality.

Challenge of synchronising the lighting mood

The real challenge was the meticulous synchronisation of the lighting mood between the studio image and the virtual Unreal environment. This created a perfect immersion for the viewer, which can hardly be distinguished from a real interaction at the same location.

The jury praises here the exemplary approach of making the appearance of a live performance of an international artist in pandemic times perfect. In the future, this could be a way to preserve musical performances and recreate them in digital space.

This extraordinary TV event was awarded the newly created "Opus AVantgard" by the jury. This award honours works away from the classic stage performance that depict current technological or staging trends in a forward-looking way.

20th anniversary of the Opus Award at Prolight + Sound

The "Opus – Deutscher Bühnenpreis" has been honouring outstanding stage projects for 20 years and has been presented annually at Prolight + Sound since 2002. A jury of industry experts from the economy, associations, trade publications and representatives of Messe Frankfurt honours new, outstanding approaches to the creative use of technology. The sponsors of the non-endowed honorary award are the Association for Media and Event Technology (VPLT), the European Association of Event Centres (EVVC) and Messe Frankfurt GmbH.