Opus Award: THE ONE Grand Show and Milky Chance

The winners of the “Opus – Deutscher Bühnenpreis 2018” couldn’t be any more different. The first winning project is a big show, an impressive set design, and costumes like a sea of colors – “THE ONE Grand Show” in Berlin’s Friedrichstadt Palast. In contrast to the set design by Milky Chance fits in a tour bus trailer, and yet it is impressive in its creation of images who fuse the music as a unit.

THE ONE Grand Show: staging a colorful dream world 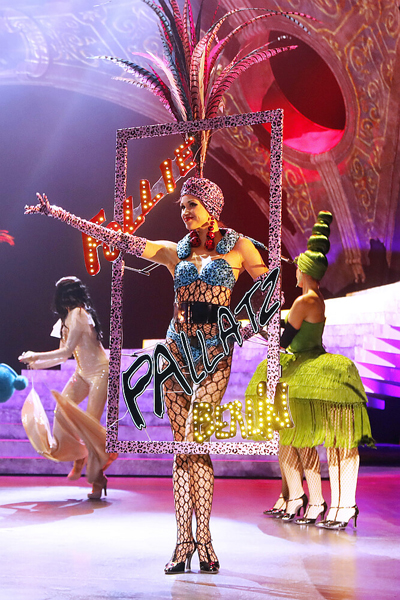 This year, the revue show “THE ONE Grand Show,” which has been playing in Berlin’s Friedrichstadt Palast since October 2016, will be distinguished with the Opus Award in the category “Technical Realization – Permanent Installation.” In cooperation with the French star designer Jean Paul Gautier, a gigantic stage show that transports the audience to a dream world out of past and present. Gaultier designed 500 colorful, opulent costumes for the revue that create a sea of colors and impressions.

In addition to impressive choreographies of dance, artistry and song, the elaborate, technical staging by producer Dr. Berndt Schmidt and director Roland Welke are the reason for the Opus Award being granted. Four three-dimensional decorative elements with an optically perforated surface create a reminiscence of an old, dilapidated theater hall. At the same time, it facilitates flexible illumination, which permanently creates new set designs without influencing the sound. This set design is supported by a creative use of special effects like black lights, fire, water, fog, as well as an “erupting” stage floor. The effect is achieved with an oval shaped stage trolley on tracks.

The two Kassel-based musicians from Milky Chance, who have already received 25 Gold and Platinum awards, have been conquering the national and international music world since 2013. Their current tourney, “The Blossom Tour,” is equally impressive with an extraordinary, individual set and lighting design, which was realized with reduced material and a limited budget.

Flexible, copper elements form the focus of the set design, which is so conceived that it fits into a tour bus trailer, and can be transported in a universal cargo flight container. Light designer Jojo Tillmann uses the copper simultaneously as a decorative element and for lighting. Controlled artificial lighting as well as the unpredictable reflection of day light on the metallic surface creates an infinite number of new light spaces that are interesting and create images that fuse with the images.

Since 2002, the Opus Deutscher Bühnenpreis has been awarded to outstanding works in the fields of lighting design, technical realization, stage and production design as well as staging. The award is considered one of the most prestigious awards in the event technology industry. The non-endowed honorary prize is awarded by the Association of Media and Event Technology (VPLT), the European Association of Event Centers (EVVC) and Messe Frankfurt. The expert jury is made up of members of the association, industry experts, media representatives and representatives of Messe Frankfurt. The award will be presented together with the Sinus Award on April 12 at a festive ceremony during the Prolight + Sound 2018.