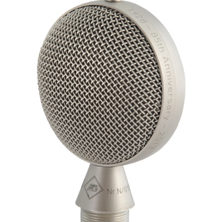 At this year’s Prolight + Sound, a new prize was awarded for the first time: Prolight + Sound International Press Award (PIPA), for outstanding products in the categories of Recording, Pro Audio, and Lights/Video. 120 trade journals and magazines from across the globe took were tasked with deciding which products were to be honoured with the new prize.

In the ‘Best Studio Microphone 2014’ category, Microtech Gefell, a microphone manufacturer based in the state of Thuringia in central Germany, was rewarded with the coveted trophy. It can thank technology that remains peerless to this day.

The CMV 563 Microphone: A Time Machine with a Future

From the very beginning, the CMV 563 was equipped with the legendary M7 capsule, which was introduced at the Berlin Olympics of 1936. “There are plenty of companies nowadays who try to copy the capsule, but we are the only ones who can produce it in the traditional manner,” noted the Microtech press department. In light of this, great emphasis has been placed on authenticity during the reissuing of the microphone. Original tools and materials have been used. Expensive maybe, but it guarantees a high-quality end product.

In order to make the CMV 563 compatible with contemporary standards, minor modifications were made to circuitry and connector design. “The combination of traditional elements with this new compatibility makes the CMV 563/M7 a time machine that makes the sound of the 1950s audible today.”

However, the development process was by no means simple: “When we started working on the CMV 563, we hadn’t expected it to be so difficult to faithfully reproduce one of our vintage products. We see this prize as recognition that we were up to that challenge,” said Microtech Gefell sales engineer Michael Militzer as he accepted the award at Messe Frankfurt.