It’s still around five months till the start of Prolight + Sound Shanghai 2017, but most of the exhibitor spaces are already taken – although another hall will be opened this year. The fair, which once again takes place in the Shanghai New International Expo Centre from 11-14 October, will celebrate its 15th anniversary on a space of 45,000 square meters.

Large Exhibitor Demand and Opening of a New Hall 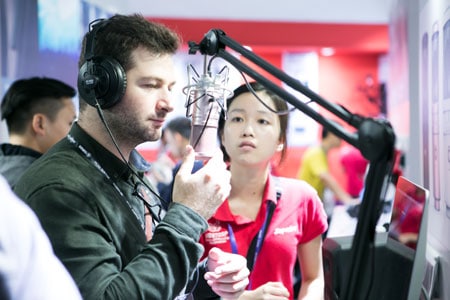 This year Prolight + Sound Shanghai is celebrating its 15th anniversary.

The entertainment industry in China is still experiencing an enormous upswing, most of all in the areas of integrated entertainment solutions, recording, and production. Thus, Asia’s leading commerce platform for professional audio, light, entertainment and event technology is opening a new hall this year to integrate these rising trends and raise the level of product diversity. Among other things, a new "AV Entertainment Solution Zone" will be introduced. The recording and production zones will also be expanded.

The enlargement of space and product portfolio is met by widespread approval from the exhibitors. Already 90 percent of the exhibitor space is reserved. Over 600 companies and brands are expected, which will present new products and solutions. For the fair in October several leading companies already announced to participate – including Adam Hall, Audio-technica, BBS, Fidek, GLP, Hai Tian, Harman, LD Systems, SAE, SE Audiotechnik, TW Audio, VUE and Zsound.

So far, the overwhelming exhibitor response has exceeded our expectations and we are already looking forward to a larger edition in terms of scale, exhibitors and visitors.
Judy Cheung, Deputy General Manager for Messe Frankfurt (Shanghai) Co Ltd

The exhibition space is now spread over four halls, organized by themes:

A significant area of the growing entertainment industry in Asia are home cinemas and – in contrast to Europe – personal karaoke rooms. In order to do justice to all the typical needs, this year's Prolight + Sound Shanghai will have the “AV Entertainment Solution Zone” in Hall N2. A diverse range of entertainment solutions for example for home cinemas will be presented in this area. This includes mini theaters, karaoke servers, head phones, loudspeakers, and microphones. In addition, there will be presentations of modern technology in Virtual Reality (VR), Augmented Reality (AR) as well as 4D motion seats in order to create a cinematic experience for users. Companies including Baofeng, BBS Electronics, Thunderstone and Wanledi are introduced in the “AV Entertainment Solution Zone”.

Visitors this year can also expect a wide-ranging program at Prolight + Sound Shanghai, including seminars, forums and demonstrations. Correspondingly, the successful “Shanghai International Film and Television Technology Forum – Sound” (IFTT) will again take place in October. The technology-oriented forums aim for the integration and continued development in television and broadcast institutions.

The practical training courses remain the main emphasis of the seminar program. Thus, there will once again be a series of courses organized in conjunction with international consortiums, including 3D audio technology, mixing tables, and lighting design. The Vision X Network – Product Presentation, and the Concert Sound Arena are also once again part of the fair.

Last year's Prolight + Sound Shanghai has concluded with impressive attendance and enthusiastic support from the industry. Over the course of four days there were 26,527 visitors at the Shanghai New International Expo Centre. 561 leading companies as well as audio and lighting brands presented their latest products and trends in the industry.