Currently, the German industrial metal band Rammstein is touring Europe's biggest stadiums with their 8th studio album. Among others, L-Acoustics loudspeakers K1, K2, Kara and subwoofers K1-SB and KS28 are in use.

To provide sound for the huge crowds and to keep up with the monumental pyrotechnics, an L-Acoustics K-Series PA system was provided by SSE Hire. The audio concept for the tour, put together by Rammstein's longtime FOH technician Olsen Involtini and systems engineer Andreas Vater, called for an L-Acoustics system and Avid VENUE Control.

Both have been working with Rammstein for a long time, and accordingly knew exactly what makes the band sound great in any stadium and allows the audience to be fully immersed in the music. Andreas Vater was supported by SSE Audio Crew Chief Nick Pain and audio engineer Nils Knecht, who oversaw the L-Acoustics Soundvision system and system alignment.

Over 200 speakers and subwoofers for thump and thunder 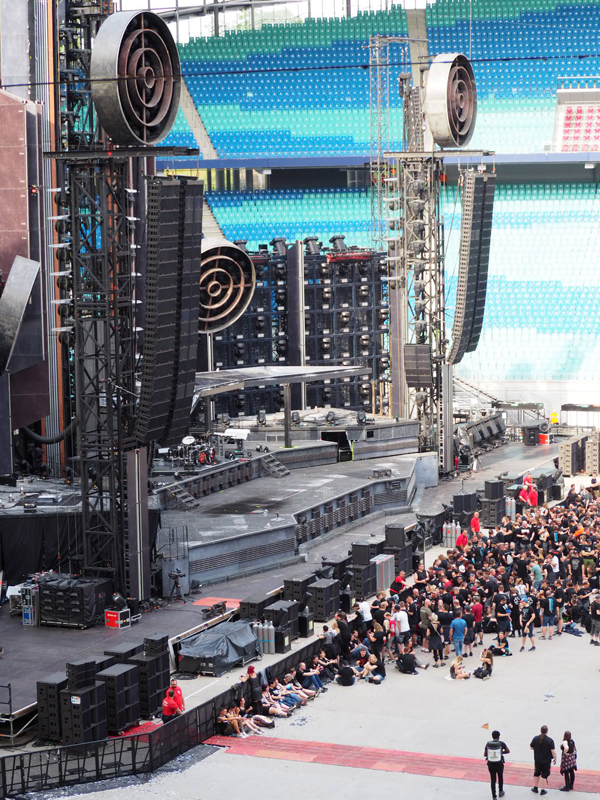 The two main sound reinforcement systems consist of 18 K1s and four K2s on each side, as well as four delay towers with 16 K1s and four K2s each. The eight delay hangers on the roof are each equipped with 12 K2s, and the front fills consist of 16 Kara and 16 ARCS II boxes. To create the desired boom and thunder from the band, two hangers were set up with 20 K1-SBs as well as another 68 KS28 subwoofers stacked on the floor. A total of 180 amplified LA12X controllers provided the necessary power.

With the system design and an appropriate number of loudspeakers, high audio quality can be provided at any venue and on any site. Concertgoers will certainly not be disappointed by Rammstein's stunning show and the power, bandwidth and clarity of the audio package.

The audio rig can be adapted and expanded to fit the different stadium sizes. In the larger stadiums, the production uses up to four delay towers and up to eight positions for roof delays with 12 K2s from L-Acoustics to eliminate unwanted reflections.

The line array rig includes several rigging challenges that SSE Audio solved at the request of the production to improve load-ins and load-outs. For example, the lifting devices for the main suspensions were to be left on the floor. The solution: a cage solution that keeps the four hoists on the floor. Each hoist can lift 2.5 tons.

With this solution, audio loading can be reduced to four to six hours, depending on the production schedule, and most unloads take only two hours.