Volkswagen Sachsen – the Saxony division of the famous German carmaker – recently celebrated its 25th anniversary. Around 60,000 guests were in attendance for a day of fun and games, a chance to experience some of the latest VW technology, and not forgetting music. Around a thousand performers strutted their stuff on three stages to offer the crowds a varied and entertaining programme. The highlight of the event came shortly before the closing firework display, with singer Laith Al-Deen performing on the main stage – where he had the crowd buzzing with a little help from 101 Kling & Freitag speakers. 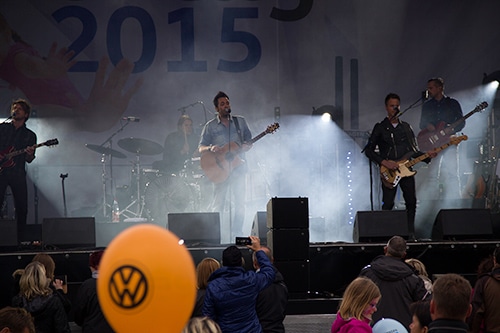 Almost all the production areas of the Zwickau plant were accessible for the family day at the beginning of September. The Chemnitz engine plant and the Transparent Factory in Dresden where the Phaeton is manufactured were also opened up. The three stages were graced with bands from among the Volkswagen workforce, and Zwickau band SK5, ensuring that there was something on offer for every taste.

The main stage and arena needed to be ready to cope with a big crowd, and that meant making sure the sound system could cover an area large enough for a music festival. Jugl Veranstaltungstechnik, who were organising the event, decided to go with Kling & Freitag systems, setting up 56 K&F Sequenza 10 N/W units in four rigged arrays. Following calculations from systems engineer Dirk Stirnimann, manager Christian Hempe also opted to use 18 K&F Nomos XLC subwoofers and 18 K&F Sequenza 10 B line arrays. Frontfill for those closest to the stage was taken care of by three further stacks with 3 K&F Sequenza 5 each.

“Given the elevation of the stage, together with the client we decided to limit the sound systems to a throw distance of 70x80m,” Stirnimann said.

“I was very pleased to have Dirk Stirnimann on my team running the setup,” said Hempe. “All those tough choices proved to be bang on the money in the end, and everyone was very satisified with the handling and sound quality from the Kling & Freitag Sequenza units, although the original plan had been to use a different system.”

Thanks in no small part to this smart behind the scenes work, the family day was the crowning flourish to Volkswagen Sachsen’s jubilee year.