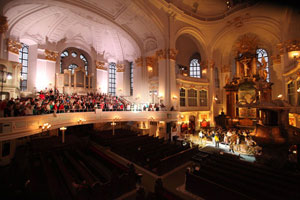 ‘Michel’ is the nickname of one of Hamburg’s most treasured symbols, and it’s not just the residents of the port city who know and love St Michael’s Church. So it was that in September, the church was chosen as the backdrop for a very special musical experience. Lyricist Michael Kunze and composer Dieter Falk presented the biblical musical “Die 10 Gebote” (The Ten Commandments) to an audience of 2,000. To make sure the music struck the right tone, audio specialists Fohhn installed its world-famous Beam Steering Technologie.

Sound in the church – a real challenge

A 550-voice choir, musical stars, a live band, and the Europäische Kammerphilharmonie orchestra told the story of Moses’ flight from Egypt, freeing people of Israel, and receiving the Ten Commandments. “Die 10 Gebote” premiered in Dortmund’s Westfalenhalle during the Ruhr 2010 festival, to an extremely favourable reception. That success led it to Hamburg.

Yet setting up satisfactory sound systems in churches has always been a challenging experience. In light of this, the experts from Fohhn decided to go with two FM-400s, two FM-110s, and two FM-100s in combination with a PS-9. They are particularly well suited to large, highly reverberant spaces such as churches. Controlled using a laptop, the sound can be precisely directed at the audience. The reverberation and echoing that would normally be generated by reflective surfaces like the floor, ceiling and columns is avoided.

The result was an all-round successful performance, with both audience and organisers visibly impressed.

Impressions of the musical “Die 10 Gebote” in Hamburg’s Michel 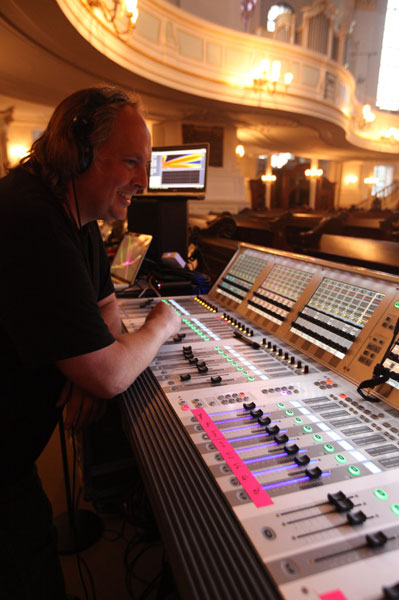