Gadget of the Week: Prizm – Streaming the smart way 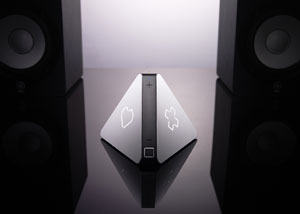 Music must match the mood. Sure, you can do that with a playlist, but you have to take time out to make them first. What if there was a device that could automatically adapt to the situation in the room and start playing the right music, depending on who is present? This is exactly what a group of French music lovers asked themselves before creating Prizm – probably the most ingenious music player of all time. It started as a crowdfunding project. Now, it's just a question of time before it hits the shops.

Music from Spotify, Deezer and Soundcloud

Prizm is a Linux desktop device that streams music. Via Bluetooth, it analyses the listening habits and musical tastes of everyone in the room, and based on that plays the most suitable music. Prizm also has a built-in microphone which measures background noise. If it’s quiet in the room, the smart player lowers the volume and chooses the appropriate musical genre. If it’s a little bit more lively, on comes the party music.

It does so by connecting to the internet streaming services Spotify, Deezer and Soundcloud to select the right songs. Additional music streaming services are set to follow. The music is transmitted to Prizm over WiFi, which connects to speakers either via Bluetooth or the old-fashioned way with cables.

Two buttons on Prizm let you either ‘love’ or ‘dislike’ music, and there’s also an app to control the device. The bonus here is that Prizm is continually learning your preferences. Brainy box!

And that’s an opinion shared by the more than 1,000 sponsors who have already supported the project on Kickstarter. It’s already clear that Prizm is going into full-scale production. With $131,000, the project has taken in almost double the funding needed. Arriving in summer 2015, Prizm will let you choose YOUR soundtrack to the summer. 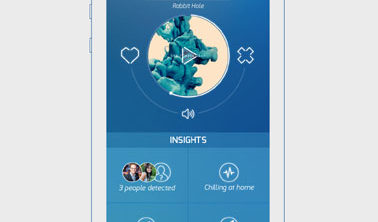