Outlook for Day 2: Highlights on Thursday 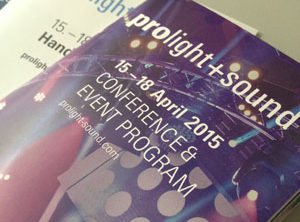 Trade fair exhibition halls, open area, conferences, and award ceremonies: the second day of Prolight + Sound 2015 also offers the visitors an extensive programme aimed at making you acquainted with the newest standards in the areas of event engineering, and installation and production. The following highlights are scheduled:

In the context of the Eventplaza Conference the focus is on production and events from 10am-6pm. The presentations take place in the Portal House, ‘Via’ level, and among other things, revolves around the question of what the event industry can learn from the film and entertainment industry.

On Thursday the Theatre and Film Colloquium also starts in Galleria 1. Costume design, acoustics in event rooms and truss systems, as well as the selection of co-workers are the subject of lectures.

The following evening is under the banner of the annual award ceremony in the context of Prolight + Sound. From 6:30pm the German Stage Prize ‘Opus’ as well as the PIPA – Prolight + Sound International Press Award and the Sinus Award 2015 in Hall 4, in the Europa room.

We are looking forward to an eventful second day of the trade fair at PLS 2015!