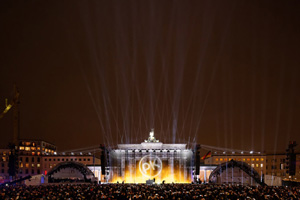 With his production for the celebration of the 25th anniversary of the fall of the Berlin Wall, 25 Jahre Mauerfall, Marcus Mechelhoff thrilled hundreds of thousands of visitors to Berlin’s Brandenburg Gate in November last year. His remit included the lighting, audio, video, and the pyrotechnics for the spectacular open air event. The skill with which he carried this out is to be recognised at Prolight + Sound 2015 where he will be bestowed with a much sought-after Opus Award for Technical Realisation.

The jury was most impressed by his creative and thematically consistent use of technology. Combined with the moving historical context, this guaranteed an emotional night, one set to live in the memory. A large variety of equipment was deployed in support of artists such as Peter Gabriel, Udo Lindenberg, Silly, and Paul Kalkbrenner, providing them with a truly one-off artistic setting. Rome wasn’t built in a day, though: in total, Mechelhoff and his team at mediapool Veranstaltungstechnik GmbH spent six months planning the event, and nearly two weeks setting it up. 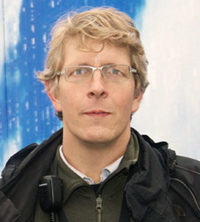 Mechelhoff CV: Obama, U2 and the World Cup

The end result was a superlative event and laurels for Mechelhoff. He is set to receive his Opus Award at the awards ceremony at Prolight + Sound on April 16th.

Mechelhoff studied stage and events technology at Beuth University of Applied Sciences Berlin and has been working for mediapool since 1998. He already has a long list of notable public events to his credit, including the World Cup 2006 closing ceremony in Berlin’s Olympic Stadium, Barack Obama’s speech at the Siegessäule in 2008, as well as the U2 concert at the MTV Europe Music Awards in Berlin. Mechelhoff also produces the annual Staatsoper für Alle classical music concert in Bebelplatz square in Berlin.